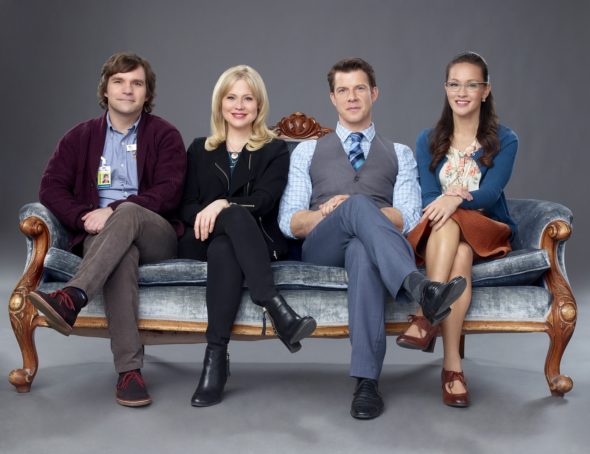 The wait is nearly over for fans of the Signed, Sealed & Delivered movies. Hallmark Movies & Mysteries has announced that the long-awaited 11th movie in the series is coming this fall.

The Signed, Sealed, Delivered story began in October 2013 as a backdoor pilot movie on Hallmark and did well enough to get the go-ahead for a weekly TV series. That lasted for 10 episodes, airing from April until June in 2014.  Rather than renew it for a second season, Hallmark opted to move Signed, Sealed, Delivered to sister channel Hallmark Movies & Mysteries and has kept it going as a series of television films. The 10th movie aired in July 2018.

It was expected that the 11th feature would debut in 2020 but filming was delayed due to the pandemic. Production is currently underway in Canada on the newest movie. Here are some timeline updates from Williamson and the cast.

#POstables. A little bird has been whispering. Nothing is official, yet. I’ll believe it when we’re gathered together, embracing one another for our table reading of @MarthaMoonWater ‘s newest brilliant script. It seems as though we may be on for SSD#11. This summer. Voices heard

Our dear, patient, compassionate, loyal Postable friends! I have pulled my official on-set jacket from the closet and begun to pack for Vancouver! Delivering the good news: “Signed, Sealed, Delivered” Movie #11 (Title TBD) will begin production in just a few weeks! #POstables pic.twitter.com/JjXYjBeGe0

We r getting this crazy group back together again soon!! pic.twitter.com/vZ7NEcb58S

Just got home #POstables ! Truly one of the very best script read-throughs we’ve ever had. Too many tears to count.

It sure is nice to be home… pic.twitter.com/c18QUNygfg

‘Hello’ from our very first day back on #SignedSealedDelivered! #POstables are all home again! pic.twitter.com/mYG2roI8kp

After many years of waiting last nights read through felt like we had never left one another. #POstables you are going to love this one. I cried 3 times during the read through lol I also laughed out loud

The man, the myth, the legend. My tv hubby, face shield, neck fans…he has it all! pic.twitter.com/VmWIfGF2aS

Based on the last tweet, it looks like Gregory Harrison will be reprising his role as Oliver’s father, Joe O’Toole. The 11th movie doesn’t have a title yet but it will air on Sunday, October 17th, at 9:00 PM.

SPOILER ALERT Here’s a teaser about the upcoming movie’s storyline: As Shane (Booth) and Oliver (Mabius) prepare for their wedding, they must pause to help a young boy fighting leukemia reunite with his long-lost friend. Their search is complicated by Shane’s mother who arrives with her own plan for their wedding. Meanwhile, Rita (Lowe) and Norman (Gustafson) navigate the challenges of trying to start a family, but a new employee in the Dead Letter Office may deliver the answer.

What do you think? Do you enjoy the Signed, Sealed, & Delivered movies? Are you looking forward to watching the 11th movie on the Hallmark Movies & Mysteries channel?

Yes, eager to see what happens.

I LOVE these movies!!! The 10 I have recorded are permanently on my DVR! Outstanding in every way: story line, script, acting, surprise elements, wrap-ups at the end, etc. When can we look forward to the next episode (#12?)?

Will there be a 12th movie?I love these.

The most AMAZING series ever made!! I really hope this latest movie is one in a long list to come. Married postables can still make incredible movies:) Love to continue to be part of their lives as they move forward!

Love this show keep it coming

Yes I can’t wait to see the new one. I watch the reruns every week. I just love this show very much.

I love ❤️ Signed Sealed and Delivered. It is an awesome show, heartwarming story lines and an excellent cast! I watch reruns every chance I get. I wish it came on every week like it used to. I hope the episode showing Oct 17th will not be the last one!

Just found ssd about a month ago. Binged watched and can’t wait til October 17. Wish they were on every week! Love it!

Love watching Signed, Sealed, Delivered shows. I always keep looking for them so I can watch them over and over. Please keep making them.

I am a postal worker in Canada , I love these movies !