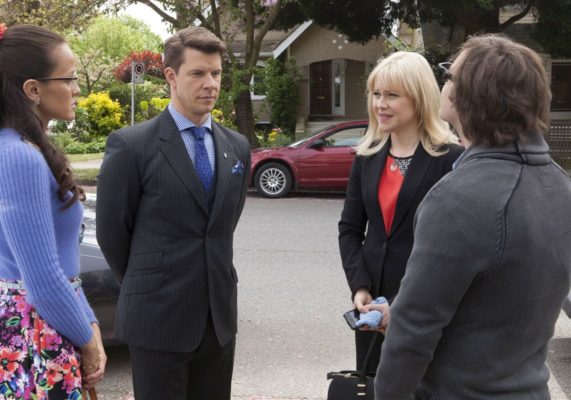 It seems that we haven’t seen the last of the POstables. Hallmark Channel has announced that the cable channel is developing a new Signed, Sealed, Delivered movie. A timetable for the new project has not been released.

As Signed, Sealed, Delivered fans know, the franchise began as a two-hour movie in 2013. It did well enough for Hallmark to order a 10 episode TV series which aired in 2014. Rather than continue as a weekly show, Hallmark opted to go back to the movie format and, to date, has aired 11 two-hour films.

Here’s the press release from Hallmark:

“Signed, Sealed, Delivered” is a comedic drama franchise that follows the lives of postal workers – known as the POstables – who transform themselves into an untraditional team of detectives to track down intended recipients of undeliverable mail. Their missions take them out of the office into an unpredictable world where redirected letters and packages can save lives, solve crimes, reunite old loves and change futures by arriving late but somehow on time.

“We’re thrilled to be able to give the devoted fans of ‘Signed, Sealed, Delivered’ a new adventure so we can continue the story of the POstables,” said Michelle Vicary, Executive Vice President, Programming and Network Publicity, Crown Media Family Networks. “The emotional and heartfelt stories the talented Martha Williamson tells are a perfect fit for our newest network, Hallmark Drama.”

What do you think? Have you enjoyed the Signed, Sealed, Delivered movies? Are you looking forward to seeing another?

I loved this series. This evening I saw the last episode. I’ve saved the whole series and hope to share it with my friends. Wonderful! I’m old enough that I also saw the “Touched by an Angel” series, too. Thank you, Martha.

I LOVE Signed, Sealed and Delivered wholesome mystery where no one get shot in the head or stabbed or run over by a tank Please show April 10th again!!!!!!!

Been waiting and watching for Canada to reopen so we can have another show. Love this series. So wholesome and involving. Yeah! Great news