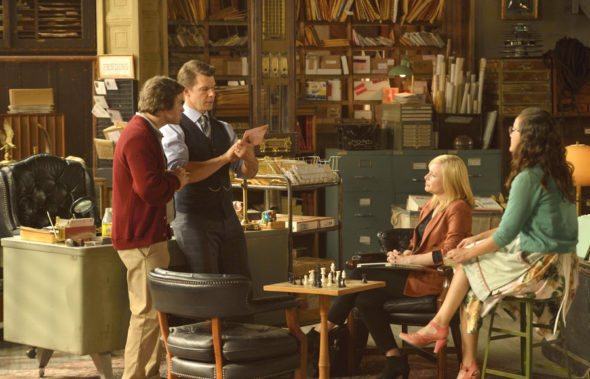 The Signed, Sealed, Delivered movies star Kristin Booth, Crystal Lowe, Eric Mabius, and Geoff Gustafson as “The POstables” — postal workers who work to track down the intended recipients of “dead letters” they receive at their Post Office.

HALLMARK MOVIES & MYSTERIES KICKS OFF ITS SUMMER OF MYSTERY WITH FOUR MONTHS OF ACTION-PACKED NEW, ORIGINAL PREMIERES TO SCINTILLATE SLEUTHERS

Returning Favorites Joined by New Faces for a Thrilling Lineup

Hallmark Movies & Mysteries heats up when the network’s Summer of Mystery kicks-off with “Darrow & Darrow: In the Key of Murder,” premiering Sunday, May 6, (7 pm ET/PT), and starring Kimberly Williams-Paisley (Father of the Bride, “Nashville“), Wendie Malick (“BoJack Horseman,” “Hot in Cleveland“) and Tom Cavanagh (“The Flash,” “Ed”).

In July, The POstables (Eric Mabius, Kristin Booth, Crystal Lowe and Geoff Gustafson) tackle a new dead letter case in a new “Signed, Sealed, Delivered,” Holly Robinson Peete and Rick Fox are back in “The Morning Show Mystery: Murder on the Menu,” while Candace Cameron Bure dives into another mystery in “Aurora Teagarden Mysteries: The Disappearing Game.”

Summer wraps up with more suspense and whodunnits with the introduction of “Crossword Mysteries” starring Lacey Chabert and Brennan Elliott, “Picture Perfect” starring Alexa and Carlos PenaVega, “Mystery U” and “The Chronicle Mysteries,” starring and executive produced by Alison Sweeney.

What do you think? Are you a fan of the Signed, Sealed, Delivered movies? Do you plan to catch them this summer, on Hallmark Movies & Mysteries? Let us know, below.

Love all the Signed, Sealed, and Delivered Movies. Please keep making them.

Love the Signed Sealed and Delivered movies! The actors are wonderful and the soundtrack is great as well. Hope there will be lots more!