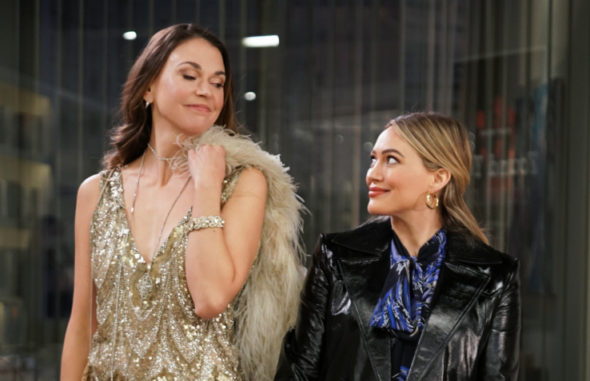 Will Liza find her happy ending? Has the Younger TV show been cancelled or renewed for an eighth season on Paramount + and TV Land? The television vulture is watching all the latest cancellation and renewal news, so this page is the place to track the status of Younger, season eight. Bookmark it, or subscribe for the latest updates. Remember, the television vulture is watching your shows. Are you?

The seventh season of Younger averaged a 0.06 rating in the 18-49 demographic and 291,000 viewers. Compared to season six, that’s down by 54% in the demo and down by 50% in viewership. It’s worth noting that the episodes have already been released on Paramount+ and Hulu. Find out how Younger stacks up against other TV Land TV shows.

We don’t have to wonder if Younger will be cancelled or renewed for season eight? It’s already been announced that season seven is the end and the series finale has been released on Paramount+ and Hulu. Could the series be revived someday? I’ll update this page with breaking developments. Subscribe for free alerts on Younger cancellation or renewal news.

What do you think? Do you wish that the Younger TV show had been renewed for an eighth season? Are you sorry that this TV Land and Paramount+ series is ending?

Sad to see there won’t be a season 8. I really looked forward to watching this series. Really liked all the characters and the whole story line. Would love to see a similar spin off soon.

I think it would be so great if there is another season!! Please! This is a fun series and I absolutely love Sutton Foster! I can not get enough of her!

Well? Let’s see! I watched the entire season on Paramount weeks ago and I have to say, seeing that the “last season” was about to and is airing now is distracting! I loved the show but wasn’t the most pleased about the shows end. I get the “open ending” with Ryan but…seriously?? Was that enough for the viewers after all of these years?
#sad