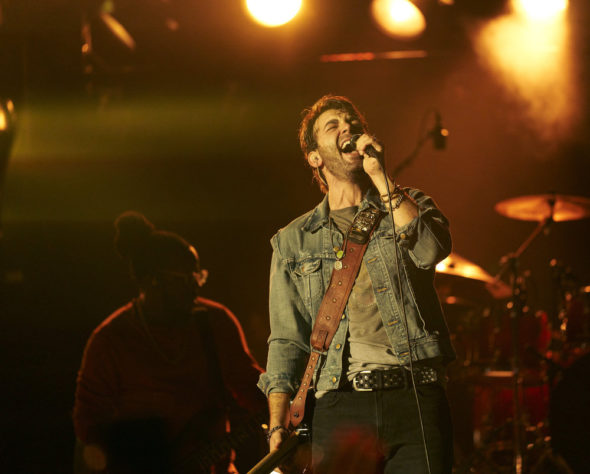 Are three Joes better than one? Has the Ordinary Joe TV show been cancelled or renewed for a second season on NBC? The television vulture is watching all the latest cancellation and renewal news, so this page is the place to track the status of Ordinary Joe, season two. Bookmark it, or subscribe for the latest updates. Remember, the television vulture is watching your shows. Are you?

Airing on the NBC television network, the Ordinary Joe TV show stars James Wolk, Natalie Martinez, Elizabeth Lail, Charlie Barnett, David Warshofsky, and Teddy Sears with Adam Rodriguez, Jack Coleman, Christine Adams, Joe Carroll, Rushi Kota, Jason Burkey, and Gabrielle Byndloss in recurring roles. The show follows young Joe Kimbreau (Wolk) as he makes a pivotal and life-changing decision at his Syracuse University graduation. The three parallel stories that diverge from that night find Joe and the people around him with different careers, relationships, and family lives. The three tales each follow Joe some 10 years after his graduation: following in his father’s footsteps, as a police officer; following his passion, as a music star; and after he marries his love, as a nurse.

The first season of Ordinary Joe averaged a 0.32 rating in the 18-49 demographic and 2.28 million viewers in the live+same day ratings (including DVR playback through 3:00 AM). While these numbers don’t include further delayed or streaming viewing, they are a very good indicator of how a show is performing, especially when compared to others on the same channel. There can be other economic factors involved in a show’s fate, but typically the higher-rated series are renewed and the lower-rated ones are cancelled. Find out how Ordinary Joe stacks up against other NBC TV shows.

Will NBC cancel or renew Ordinary Joe for season two? The peacock network hasn’t had much luck launching new drama series lately and it would be nice if this one could fill the gap left by This Is Us once it finishes its sixth and final season in 2022. Unfortunately, the ratings are not good so I think the series will likely be cancelled.  I’ll update this page with breaking developments. Subscribe for free alerts on Ordinary Joe cancellation or renewal news.

3/4/2022 update: NBC has cancelled the Ordinary Joe TV show after one season.

What do you think? Were you hoping that the Ordinary Joe TV show would be renewed for a second season? Are you sorry that NBC cancelled this TV series, instead?

First Council of Dads now Ordinary Joe. Why does NBC refuse to give shows with interesting and diverse casts a chance to tell their well written stories? Believe it or not there is an audience for shows that are thought provoking and moving instead of a constant barrage of reality, medical, police and courtroom clones.

Ordinary Joe is an amazing show. I am truly heartbroken that again you cancel a beautiful and gripping story for the stupid reality crap on t.v. you should try and remember shows like ordinary Joe are entertainment. Shame on you for cancelling.

Ordinary Joe is great! Love this show and the portrayal of Chris, their son is outstanding. Please give this show another season. It will be a good replacement for This is Us. Very thought provoking! Thanks!!!

Will be very sad if it does not return. Love Ordinary Joe. Please return.

Please don’t take off, it is one the better night shows to watch at night. Just please bring back and soon,we miss it!

I look forward to seeing the show every Monday night. In each story there is always many twists and turns it keeps you watching every week. NBC please keep this show.

I really love this show.