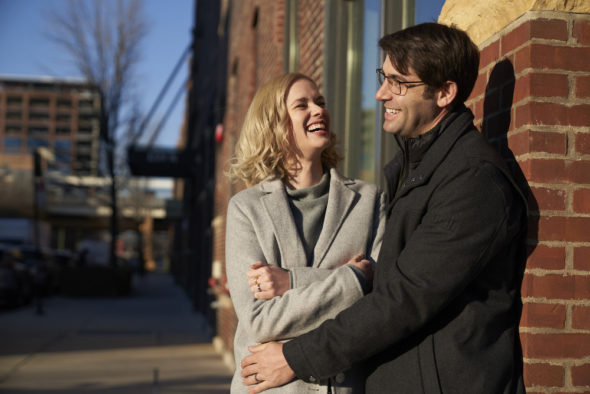 We won’t get to see more of Joe’s lives in the 2022-23 television season. NBC has cancelled Ordinary Joe so it won’t have a second year.

A drama series, the Ordinary Joe TV show stars James Wolk, Natalie Martinez, Elizabeth Lail, Charlie Barnett, David Warshofsky, and Teddy Sears with Adam Rodriguez, Jack Coleman, Christine Adams, Joe Carroll, Rushi Kota, Jason Burkey, and Gabrielle Byndloss in recurring roles. The show follows young Joe Kimbreau (Wolk) as he makes a pivotal and life-changing decision at his Syracuse University graduation. The three parallel stories that diverge from that night find Joe and the people around him with different careers, relationships, and family lives. The three tales each follow Joe some 10 years after his graduation: following in his father’s footsteps, as a police officer; following his passion, as a music star; and after he marries his love, as a nurse.

Airing on Monday nights, the first season of Ordinary Joe averaged a 0.32 rating in the 18-49 demographic and 2.28 million viewers in the live+same day ratings (including DVR playback through 3:00 AM). It was one of the lowest-rated scripted series of the peacock network’s current season. In the live+7 day ratings, the show averaged a 0.47 with 3.41 million, bringing in an additional 44% in the demo and 50% more viewers.

Check out our NBC status sheet to track the peacock network’s new series pickups, renewals, and cancellations. You can find lists of cancelled shows here.
What do you think? Have you enjoyed the Ordinary Joe TV series on NBC? Are you disappointed that there won’t be a second season?

I really enjoyed this show immensely! It was well written and gave one reason to have some self reflection! PLEASE bring it back!

I am soooo disappointed that Ordinary Joe was canceled. I looked forward to seeing it every Monday night. It was the only show that I looked forward to watching. I loved the show and the characters. PLEASE renew it, I’m begging you. I know a lot of other folks that feel the same way, it’s a great show and very intriguing and interesting to watch. I think it’s genius in the way it was written, the writers and actors should be commended, not canceled. I am not interested in watching anything else. Thank you for listening to your viewers.