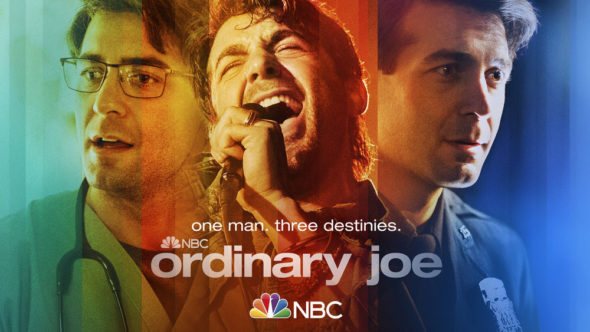 NBC has had great success with This Is Us, a family drama that explores characters’ lives by going back and forth in time. That show is ending this season and the peacock network has now introduced Ordinary Joe, a drama that follows the main character’s life via three possible timelines. Will it also be a hit? Will Ordinary Joe be cancelled or renewed for season two? Stay tuned.

A drama series, the Ordinary Joe TV show stars James Wolk, Natalie Martinez, Elizabeth Lail, Charlie Barnett, David Warshofsky, and Teddy Sears with Adam Rodriguez, Jack Coleman, Christine Adams, Joe Carroll, Rushi Kota, Jason Burkey, and Gabrielle Byndloss in recurring roles. The show follows young Joe Kimbreau (Wolk) as he makes a pivotal and life-changing decision at his Syracuse University graduation. The three parallel stories that diverge from that night find Joe and the people around him with different careers, relationships, and family lives. The three tales each follow Joe some 10 years after his graduation: following in his father’s footsteps, as a police officer; following his passion, as a music star; and after he marries his love, as a nurse.

10/19 update: You can see the latest night’s ratings in context.

What do you think? Do you like the Ordinary Joe TV series on NBC? Should it be cancelled or renewed for a second season?

Please boost boost your ratings and boost ratings. Look forward every Monday night drama such a great cast of character this show after the voice enjoy it and love it. New series interesting story keep guessing.

I’m still watching/enjoying this, but sometimes it’s confusing which reality I’m watching. And sometimes there are events common to more than one reality, which makes the confusion worse.
I feel like I should be taking notes.

Please boost your ratings. Look forward new series enjoy it and love it.

love this new show enjoy it and love it. Worth watching look forward something all summer very interesting drama.

Agree with you love this new show enjoy it and love it. Worth watching look forward something all summer very interesting drama.

Please boost your ratings look forward to seeing it. New show look forward every Monday night. Enjoy it and love it. Never missed any episode of it.

Interesting premise, likeable characters — I think I’ll give this show a chance.
The obvious series conclusion is, of course, that all three Joes wind up in the same circumstances.
Destiny.