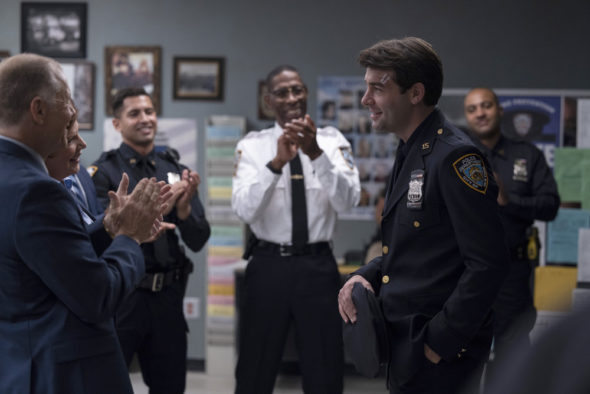 Will Joe find happiness (in any of his life stories) in the first season of the Ordinary Joe TV show on NBC? As we all know, the Nielsen ratings typically play a big role in determining whether a TV show like Ordinary Joe is cancelled or renewed for season two. Unfortunately, most of us do not live in Nielsen households. Because many viewers feel frustrated when their viewing habits and opinions aren’t considered, we invite you to rate all of the first season episodes of Ordinary Joe here. *Status update below.

An NBC drama series, the Ordinary Joe TV show stars James Wolk, Natalie Martinez, Elizabeth Lail, Charlie Barnett, David Warshofsky, and Teddy Sears with Adam Rodriguez, Jack Coleman, Christine Adams, Joe Carroll, Rushi Kota, Jason Burkey, and Gabrielle Byndloss in recurring roles. The show follows young Joe Kimbreau (Wolk) as he makes a pivotal and life-changing decision at his Syracuse University graduation. The three parallel stories that diverge from that night find Joe and the people around him with different careers, relationships, and family lives. The three tales each follow Joe some 10 years after his graduation: following in his father’s footsteps, as a police officer; following his passion, as a music star; and after he marries his love, as a nurse.

What do you think? Which season one episodes of the Ordinary Joe TV series do you rate as wonderful, terrible, or somewhere between? Do you think that Ordinary Joe should be cancelled or renewed for a second season on NBC? Don’t forget to vote, and share your thoughts, below.

*3/4/2022 update: NBC has cancelled the Ordinary Joe TV show after one season.

I thoroughly enjoyed Ordinary Joe. One Joe, but it shows three different life choices after he finishes college somewhat like the movie Sliding Doors. What I liked the most was that the married Joe has a son with a physical disability and it’s very realistic! They showed scenarios where I said “OMG…YES!!!” Even a comment from the Married Joe told his son, Christopher why they were driving somewhere instead of flying. (because airlines break tens of thousands of wheelchairs a year! ) So many other scenes as a person living with a physical disability with other complications, it was so… Read more »

Ordinary Joe is a wonderful show with a purpose and meaning that the choices we make do matter. Please don;t cancel

Just read the update of March 4 that “Ordinary Joe” has been cancelled for Season 2. I am very disappointed as the show was excellent. Finally a good show, along with “This Is Us”, and it was cancelled. So many awful reality shows that should be cancelled, so many other awful shows, too. Wrong move, in my opinion.

This is a good show, refreshing story line. So tired of reality shows . . so phoney. I look forward to seeing Joe every week.

Please renewed season 2. So good new drama so good look forward to seeing it every Monday late night. Enjoy it and love it all good.

This show should definitely be renewed. So tired of “reality” drama. This show makes you think about your own decisions in life and where you would “be” if you chose another direction. Very creative. I love a wonderful show that makes you think, feel and wonder like ordinary Joe. Kudos to an awesome show.

We have thoroughly enjoyed Ordinary Joe, and cannot wait to see what happens next. Please renew this very interesting TV show. Each of us has made choices in life, and this program touches our hearts. Well done! Thank you for keeping us interested and involved.

Luv Ordinary Joe! It is refreshing to see something besides reality TV. Need more shows like this! Love the plot and always have loved him!

Please renewed season 2 new drama look forward to seeing it every Monday late night. Enjoy it and love it.

This show is pretty awesome, all 3 storylines are good and keep you invested. Probably my favorite new show this past year. Deserves a 2nd season, so tired of all these 1 and done shows. Being left with cliffhangers all the time.