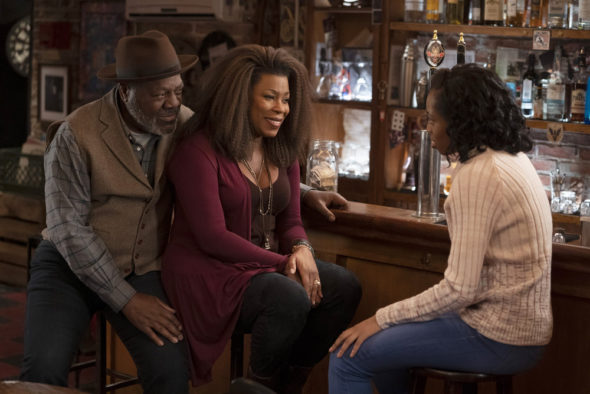 NBC has evicted one of its newest drama series. The network has cancelled The Village TV show so there won’t be a second season.

The Village stars Warren Christie, Michaela McManus, Lorraine Toussaint, Frankie Faison, Jerod Haynes, Dominic Chianese, Darren Kagasoff, Grace Van Dien, and Moran Atias. The story centers on the residents of a Brooklyn apartment building. While it looks the same as countless others from the outside, what goes on inside is rare, to say the least. Everyone at the Village has a story to tell, be it about their hopes and dreams, or the challenges they’re facing. Together, they’re a family and family means everything — even when you are not related.

The first season of The Village averaged a 0.66 rating in the 18-49 demographic and 4.12 million viewers. The defacto series finale aired on May 21st.

Compared to the other scripted NBC TV shows of the 2018-19 season, The Village ranks 13th in the demo and ninth in viewership. The series saw a momentary bump in the ratings ratings when NBC moved it an earlier timeslot but it didn’t last and the numbers soon hit new lows.

Today, the Peacock Network also cancelled The Enemy Within and Abby’s TV shows.

What do you think? Do you like The Village TV show? Are you sorry that it’s been cancelled. Would you have watched season two on NBC?

I LOVED THIS SHOW! Real life situations, predictions, troubles, dilemmas, and much more! How can this show be canceled??? The characters that played each part were fantastic! PLEASE BRING IT BACK!!!!!!!!!!!!!

Can’t believe there was no real ending so we invest in 10 episodes and totally love it then nothing…….why was it cancelled its strange as obviously viewing figures were there ? Honestly not dure I’d have started if I’d known it would end ..all undone like that

I liked watching the village. I really wish you would re think your decision and give the show another chance. I looked forward to watching the show each week. Please bring it back.

Oh, no! I loved this show! I was waiting for the new season after all this time to find out it had been cancelled. I’m so shocked because it was such a great show! Now, it’s nothing worth watching again. All these stupid dumb reality shows clogging up the TV screen I was finally happy to have something worth while to watch and now I find out it’s been cancelled. You could’ve at least given it another chance to survive Nothing but smut on TV still. Damnit

The Village was the first American show worth watching for a really long time. It is shown first now in Europe. So sad if there will not be second season.

Absolutely loved this show. Wholesome real life situations that was so relatable and enjoyable with a great cast. Bring the show back. I know so many people that loved and watched it. Very disappointing. Shows today dont get a chance. Back in the day they were going to shut down Beverly Hills 90210 and look how that turned out years later. Bring this show back

I truly hate that this show is not coming back on!!!!! I really enjoyed it! Every time a show came on that I truly liked, it got cancelled! So sad

Bring it back please it was Just as good as This is us. And im huge fan of this is us mabey show it on another Chanel the actors we’re awesome loved the show I need more

Omg I just finished season one here in Australia. Loved it!!!. So disappointed there will be no season two. Someone isn’t thinking straight. Maybe you need to give it another go and put it in a good time slot straight away. BRING IT BACK!!

I loved season 1 of the village. Sad

My goodness fantastic show – just stumbled across it 6 of us just watched whole season in Australia NO advertising at all here. We all loved it. Cant believe not other seasons terrible decision!!!!