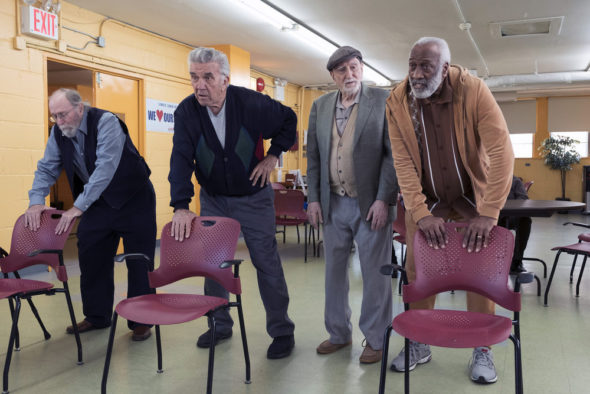 Does the first season of The Village TV show on NBC feel like home to you? As we all know, the Nielsen ratings typically play a big role in determining whether a TV show like The Village is cancelled or renewed for season two. Unfortunately, most of us do not live in Nielsen households. Because many viewers feel frustration when their viewing habits and opinions aren’t considered, we’d like to offer you the chance to rate all of The Village season one episodes here. *Status update below.

An NBC drama, The Village stars Warren Christie, Michaela McManus, Lorraine Toussaint, Frankie Faison, Jerod Haynes, Dominic Chianese, Darren Kagasoff, Grace Van Dien, and Moran Atias. The story centers on the residents of a Brooklyn apartment building. While it looks the same as countless others from the outside, what goes on inside is rare, to say the least. Everyone at the Village has a story to tell, be it about their hopes and dreams, or the challenges they’re facing. Together, they’re a family and family means everything — even when you are not related.

What do you think? Which season one episodes of The Village TV series do you rate as wonderful, terrible, or somewhere between? Should NBC cancel or renew The Village for a second season? Don’t forget to vote, and share your thoughts, below.

*5/30/19 update: NBC has cancelled The Village TV show so it won’t return for a second season.

So sad! Perfect story line and writing, fantastic characters, best new series, and you trashed it?!? The end of the first season left everyone hanging. Instead you replace it with yet another reality bs show. We have all had enough reality to last a lifetime the past year plus. Truly disappointed in NBC for letting this go.

This is why i hate watching NBC cause they dont give a good show a chance they just cancel it but renew stupid so called comedies that stink and let them drag out.

Another great show is removed while so called comedies and poor quality dramas remain. The network needs to cancel some of the brass that make these ridiculous decisions.

The Village was a great show. I was really looking forward to it’s return. I don’t watch much TV, but this show hooked me.

Another great show seriously? Going to be gone? I don’t understand the logic! This show has everything, comedy, romance, real life and its family friendly too! Even sheds a light on PTSD and unplanned pregnancy and single moms rocking it, How do you seriously turn your back on a show this good?
But in my opinion stupid shows like survivor keep coming back seriously? I don’t get it or remakes keep being done when you already have this great original shows! Smh,

Please bring back The Village..such a great show

I am so upset The Village has been cancelled. This was one of the best shows I have ever watched. Have been waiting so long for season 2 only to find out it was cancelled. Please bring this show back. It was so real to so many and just so captivating. There are very few shows on like this one. It’s so sad it has been cancelled.

So upset that “The Village” has been cancelled!!!! One of the best tv series last year!!!!! Was waiting for it to come back on, so I googled it to find out. How disappointed I was to find out if was cacelled!! Please bring it back. Thank you!!!!