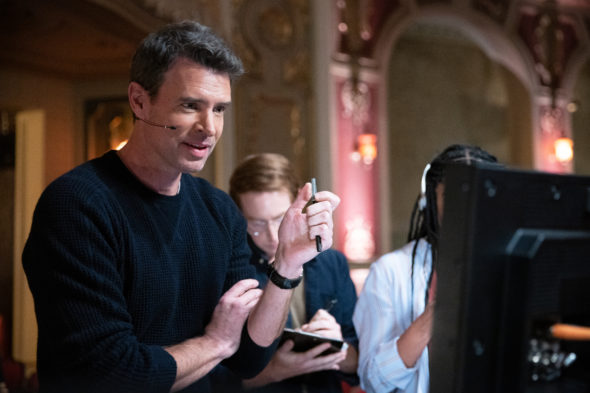 This show won’t go on for The Big Leap in the 2022-23 television season. The low-rated show has been cancelled by FOX.

A musical dramedy series, The Big Leap TV show stars Scott Foley, Teri Polo, Piper Perabo, Simone Recasner, Ser’Darius Blain, Jon Rudnitsky, Raymond Cham Jr., Mallory Jansen, Kevin Daniels, and Anna Grace Barlow. Described as “big-hearted and rowdy,” this scripted series follows a group of diverse, down-on-their-luck people who attempt to change their lives by participating in a potentially life-ruining reality dance show that builds to a live production of Swan Lake. What this group of underdogs lacks in dance training, they make up for with their edge, wit, and desire to reimagine an iconic story to fit their own mold.

Airing on Monday nights, the first season of The Big Leap averaged a 0.24 rating in the 18-49 demographic and 1.27 million viewers in the live+same day ratings (including DVR playback through 3:00 AM).  It was FOX’s lowest-rated scripted series of the 2021-22 television season. In the live+7 day ratings, Big Leap averaged a 0.35 demo with just 2.02 million, an increase of 48% and 60%, respectively.

The first season of The Big Leap wrapped on December 6th. Another freshman series that also aired on Monday nights, Ordinary Joe, was also cancelled today.

Foley took to Instagram to thank viewers for their support.

Check out our FOX status sheet to track the network’s new series pickups, renewals, and cancellations. You can find lists of cancelled shows here.
What do you think? Have you checked out The Big Leap TV series on FOX? Are you sorry to know that it won’t have a second season?

I loved this show and everyone I know who watched it loved it. Please bring it back

How can they leave it like that?!? We get involved in these people’s lives, and then nothing! I need closure!!!

Fox is being short sighted by canceling this show. The ensemble and writing are near perfection. It should have been tried in a different time slot or day. The show will be missed.

Idoits. at least make a quick ending on these shows that are canceled

SOOOOOO UPSET!!!! ! LOVED THIS SHOW!!!
YOU ALWAYS CANCEL THE BEST SHOWS!!!! FOX OR WHOEVER YOU ARE YOU COMPLETELY SUCK!!!!!!

Yes but the networks always keep on the garbage shows

Two good shows have been canceled: the Big Leap and Ordinary Joe. What an absolute shame!

In the first 2 or 3 episodes there was a kind of magic, of potential. Unfortunately they didn’t keep that up. The actors did a good job and production-wise it was solid as well. Whether it was the writing or the directing, I can’t put my finger on it. But they lost whatever spark was there in the first 2 or 3 episodes. The remainder of episodes were not bad at all. So yes, it is a shame the series is cancelled, as some of the dancing was really amazing. Musicals and anything remotely similar I normally dislike with a… Read more »