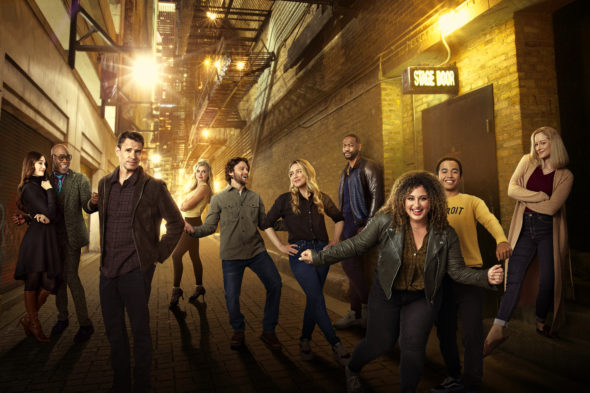 TV show description:
A musical dramedy series, The Big Leap TV show was created by Liz Heldens and is based on Big Ballet, a British reality series.

Described as “big-hearted and rowdy,” this scripted series follows a group of diverse, down-on-their-luck people who attempt to change their lives by participating in a potentially life-ruining reality dance show that builds to a live production of Swan Lake.

On the heels of his latest show failure and a stressful divorce, producer Nick Blackburn (Foley) reluctantly signs on to produce The Big Leap, a high-stakes docu-series filming in Motor City. The show, which brings together dancers from every age, background, and body type, is the brainchild of former dancer Wayne Fontaine (Daniels). With choreographer Monica Sullivan (Jansen) on board to help Nick mount the production, he begins his search for not only the best dancers, but also the ones that could stir up the most drama and buzz.

Gabby Lewis (Recasner) once dreamt of becoming a professional dancer, but her dreams were sidelined when she got pregnant right out of high school. In the midst of the monotony of her office job, she stumbles upon an open casting call for The Big Leap, reigniting her passion for dance.

Auditioning alongside Gabby is Justin Calgrove (Cham Jr.), Gabby’s former dance partner and high school boyfriend — until he came out of the closet, to the surprise of no one, except Gabby.

Their fellow contestants include Reggie Sadler (Blain), a professional football star on the brink of suspension and whom Nick believes could give the show the star power and controversy it needs to break through; Brittany Lovewell (Barlow), a born-and-bred hyper-competitive ballroom dancer whose partner is her twin brother; unemployed autoworker Mike Devries (Rudnitsky), whose gradual unraveling recently led his wife to leave him; Paula Clark (Perabo), a high-powered corporate executive; and former ballerina Julia Perkins (Polo), who relies on social media for the attention she craves from her family.

What this group of underdogs lacks in dance training, they make up for with their edge, wit, and desire to reimagine an iconic story to fit their own mold.

Series Finale:
Episode #11 — We Make Our Own Light
When a massive blackout threatens to stop the finale from airing, the whole cast has to band together to light up the stage. Reggie attempts a rapprochement with Gabby, while Nick works to convince the network that this show is something special. Meanwhile, the rest of the cast deals with nerves over their final performance and Brittney gets a shocking surprise.
First aired: December 6, 2021.

What do you think? Do you like The Big Leap TV show? Do you think it should have been cancelled or renewed for a second season?