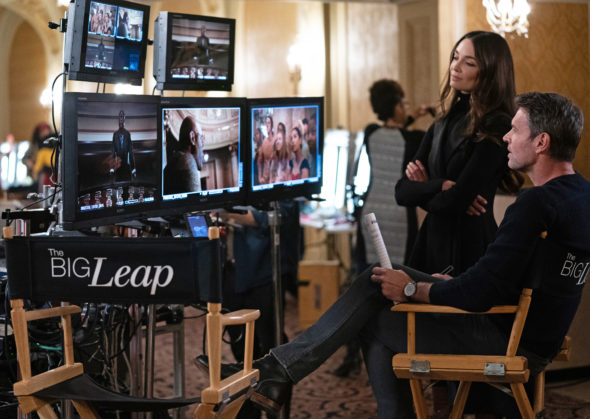 Can a reality show change these people’s lives for the better? Has The Big Leap TV show been cancelled or renewed for a second season on FOX? The television vulture is watching all the latest cancellation and renewal news, so this page is the place to track the status of The Big Leap, season two. Bookmark it, or subscribe for the latest updates. Remember, the television vulture is watching your shows. Are you?

Airing on the FOX television network, The Big Leap TV show stars Scott Foley, Teri Polo, Piper Perabo, Simone Recasner, Ser’Darius Blain, Jon Rudnitsky, Raymond Cham Jr., Mallory Jansen, Kevin Daniels, and Anna Grace Barlow. Described as “big-hearted and rowdy,” this scripted series follows a group of diverse, down-on-their-luck people who attempt to change their lives by participating in a potentially life-ruining reality dance show that builds to a live production of Swan Lake. What this group of underdogs lacks in dance training, they make up for with their edge, wit, and desire to reimagine an iconic story to fit their own mold.

The first season of The Big Leap averaged a 0.24 rating in the 18-49 demographic and 1.27 million viewers in the live+same day ratings (including DVR playback through 3:00 AM). While these numbers don’t include further delayed or streaming viewing, they are a very good indicator of how a show is performing, especially when compared to others on the same channel. Other economic factors can be involved in a show’s fate, but typically, the higher-rated series are renewed, and the lower-rated ones are cancelled. Find out how The Big Leap stacks up against other FOX TV shows.

Will FOX cancel or renew The Big Leap for season two? The network could use some new scripted series, but this show has been struggling in the ratings. If the numbers don’t improve, I think The Big Leap could be the first cancellation of the season. I’ll update this page with breaking developments. Subscribe for free alerts on The Big Leap cancellation or renewal news.

What do you think? Were you hoping that The Big Leap TV show would be renewed for a second season? Are you sorry that FOX cancelled this show instead?

Love this show so much. I wish we had season 2 to follow up with what happened between reggie, gabby, & brittany. This show could ho so much further. Please bring it back. I found it on Hulu.

I found this show on Hulu and I loved it! It is entertaining, has heart and really kept our interest! I felt like it was a combination on Ted Lasso and Glee. Please bring it back for season 2!

We live in a new world… and TV Shows should not be set strictly set on viewing ratings… We are so busy these days we record and watch later… there should be a way to count those views… Then you would see that The Big Leap was the BEST show to come out of FOX in a while. It should AT LEAST get a second season, please!!!

I was not into The Big Leap in the first 2 episodes, but something g made me keep watching. I ended up loving it. Just binged the whole season. LOVE IT!!! PLEASE BRING SEASON 2!!!!

Big Leap was the best thing I have seen in years. You have to bring it back for another season!!

Please Please Please bring back the Big Leap for a Season 2… I rarely watch regular tv shows but I must tell you I couldn’t wait to watch this EVERY week… I laughed, I cried, I smiled a whole lot…. I love all the characters, especially Gabby and Reggie. I truly would love to see more….

Absolutely!!! FANTASTIC SHOW!!! bring back for a season 2!!!

YES YES YES – renew this show! It’s well written and the delivery of the lines are spot on! I care about the characters (all of them) and really enjoy their individual back stories. Again – the writing is amazing! Scott Foley is a true pro and can take on any persona – from despising him in Scandal to loving him in Leap, he’s an actor to be commended. Thank you and the rest of the cast!

This was one of my favorite new shows this year. I couldn’t wait for it to come on every week. Please renew!!

My son and I just finished binging Season 1. We love the show. It’s funny, so entertaining and the characters are interesting. Please renew it. Move it to another slot if that helps increase viewers.

I DVRd the whole season, but just got around to watching it. I ended up watching the whole season in two viewing settings. I really hope it gets renewed..I found it very uplifting and truly fun to watch.