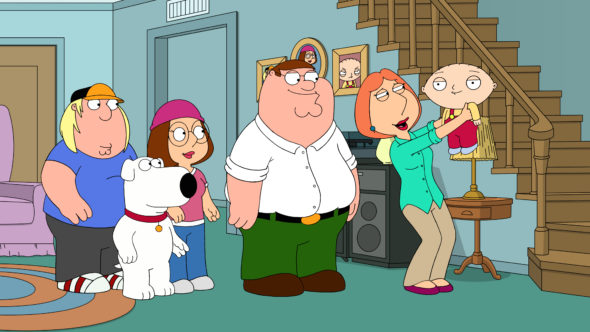 Will Stewie speak again? Has the Family Guy TV show been cancelled or renewed for a 19th season on FOX? The television vulture is watching all the latest cancellation and renewal news, so this page is the place to track the status of Family Guy, season 19. Bookmark it, or subscribe for the latest updates. Remember, the television vulture is watching your shows. Are you?

Airing on the FOX television network, Family Guy stars voice actors Seth MacFarlane, Alex Borstein, Mila Kunis, Seth Green, Patrick Warburton, and Arif Zahir. The series follows stereotypical sitcom dad Peter Griffin (MacFarlane). Overweight and a bit dim, Peter is close to his family but is also a heavy drinker. A piano teacher, wife Lois (Borstein) is a stay-at-home mother and usually ends up being the impatient voice of reason. An outcast at school, 18-year-old Meg (Kunis) is the family’s preferred dumping ground. Overweight like his dad, 13-year-old Chris (Green) is socially awkward and clueless, especially when it comes to the opposite sex. The baby of the family, one-year-old Stewie (MacFarlane) is diabolically clever, if sexually confused. Rounding out the Griffin family is their talking dog, Brian (MacFarlane). A ladies’ “man” who is particularly devoted to Lois, Brian is about one step away from AA.

The 18th season of Family Guy averages a 0.57 rating in the 18-49 demographic and 1.53 million viewers. Compared to season 17, that’s down by 20% in the demo and down by 15% in viewership. Find out how Family Guy stacks up against other FOX TV shows.

There’s no need to worry about Family Guy being cancelled for a while since the network has already renewed the Sunday night series for season 19 (2021-22) and season 20 (2022-23). I’ll update this page with breaking developments. Subscribe for free alerts on Family Guy cancellation or renewal news.

What do you think? Are you glad that the Family Guy TV show has been renewed for a 19th season? How would you feel if FOX had cancelled this TV series, instead?

Yes love this show it’s funny and a hell better than the news or anything that has to do with real people and politicians. If I’m lying I’m dying. Come on really sometimes this show makes more sense than reality. Let me put it this way Petter Griffin would make a better president at this point. And Brian Griffin as vice president as the voice of reason and sanity. Love the show ☺️

This show is very disgusting against women, there’s no reason for the show to have a pervert like Quigmier to begin with, the episode last night 1-7-2022 was the last time I watched a cartoon character or characters digrate woman and talk about us like we are horses and *****. I believe most of men are actracted to the show more.
Have a beautiful life