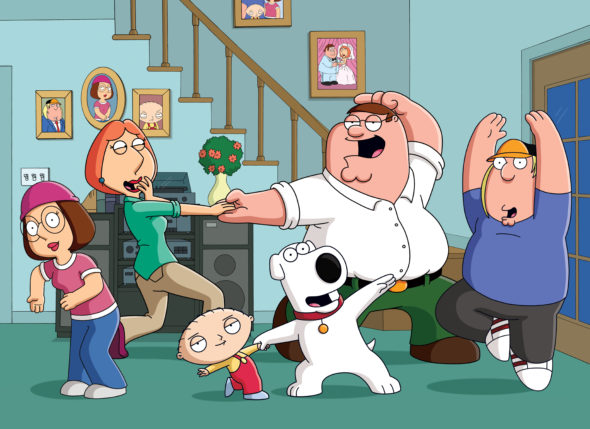 What’s next for Peter Griffin and family? Is the Family Guy TV show cancelled or renewed for a 17th season on FOX? The television vulture is watching all TV series cancellation and renewal news, so this page is the place to track the status of Family Guy, season 17. Bookmark it or subscribe for the latest updates. Remember, the television vulture is watching your shows. Are you?

The 16th season of Family Guy is averaged a 1.02 rating in the 18-49 demographic and 2.41 million viewers. Compared to season 15, that’s down by 10% in the demo and down by 4% in viewership. Find out how Family Guy stacks up against the other FOX TV shows.

While Family Guy’s performance has faded some over the years, the show has remained a top 10 performer in the demo for FOX. Animated shows are usually cheaper to produce than live-action series and this one makes boatloads of cash in syndication. While it is too early to use the ratings to predict whether FOX will cancel or renew Family Guy for season 17, that’s where my money is. Still, I’ll keep a hungry eye on the Nielsens and will update this page with breaking developments. Subscribe for free updates on any Family Guy cancellation or renewal news.

What do you think? Did you think the Family Guy TV show would be renewed for a 17th season? How would you feel if FOX had cancelled this TV show, instead?