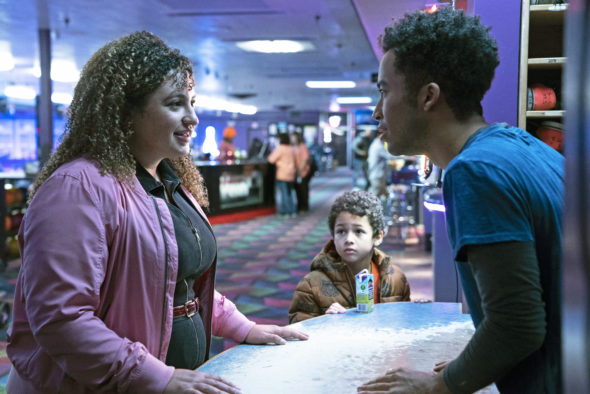 Which characters will get to realize their dreams in the first season of The Big Leap TV show on FOX? As we all know, the Nielsen ratings typically play a big role in determining whether a TV show like The Big Leap is cancelled or renewed for season two. Unfortunately, most of us do not live in Nielsen households. Because many viewers feel frustrated when their viewing habits and opinions aren’t considered, we invite you to rate all of the first season episodes of The Big Leap here. *Status update below.

A FOX musical dramedy series, The Big Leap TV show stars Scott Foley, Teri Polo, Piper Perabo, Simone Recasner, Ser’Darius Blain, Jon Rudnitsky, Raymond Cham Jr., Mallory Jansen, Kevin Daniels, and Anna Grace Barlow. Described as “big-hearted and rowdy,” this scripted series follows a group of diverse, down-on-their-luck people. They attempt to change their lives by participating in a potentially life-ruining reality dance show that builds to a live production of Swan Lake. What this group of underdogs lacks in dance training, they make up for with their edge, wit, and desire to reimagine an iconic story to fit their own mold.

What do you think? Which season one episodes of The Big Leap TV series do you rate as wonderful, terrible, or somewhere between? Do you think that The Big Leap should be cancelled or renewed for a second season on FOX? Don’t forget to vote, and share your thoughts, below.

*11/8/2021 update: FOX decided not to order any additional episodes of The Big Leap for its first season. Coupled with the poor ratings, a second season renewal looks unlikely.

This show reaches many people with its themes of acceptance of all people, follow your dreams, love, compromise and more. Ordinary people doing extraordinary things! Imperative that it be renewed!

This is a great show. It’s underrated and it gets better and better as it goes on. It’s imaginative, biting, witty, sad, funny. It has everything – sarcasm, irony, revenge, love, heartbreak. It would be such a shame for the network to dump this series. And hopefully they won’t. I’m glued to each episode

The Big Leap gets better with each episode. It is quirky and fun and silly and sad and all the emotions that make me want to be a part of its journey for more that just one season. I’m in love with Paula and Mike and I’m rooting for Reggie and Gabby and I’m cheering for Julia and Linus the couples are great. From the dancing to the music and all the drama kept fueled by Nick and his need for redemption from his past this show makes me believe in making your dreams come true. I hope it continues.

My favorite new show
Please do not cancel

I think it is boring!

They better NOT cancel this show, I’ve fallen in love with ALL of the characters so far (especially the lead girl and ex high school crush). I’ve already programmed my DVR to record the entire season, so don’t disappoint me FOX!!!

Really enjoyed the Big Leap. But How can a show be considered for renewal or cancellation after 1 episode? Viewers nee time to bond and root for the characters. So far a winner for me.

Loved this so much already. The cast is everything. Feel good tv.