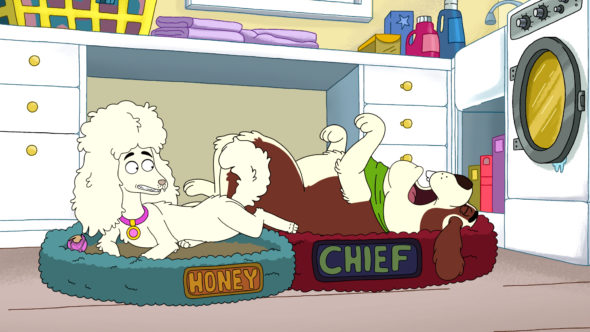 Will these pets overcome their problems in the first season of the Housebroken TV show on FOX? As we all know, the Nielsen ratings typically play a big role in determining whether a TV show like Housebroken is cancelled or renewed for season two. Unfortunately, most of us do not live in Nielsen households. Because many viewers feel frustrated when their viewing habits and opinions aren’t considered, we invite you to rate all of the first season episodes of Housebroken here.  *Status Update Below.

A FOX animated comedy series, the Housebroken TV show stars Lisa Kudrow, Will Forte, Clea DuVall, Nat Faxon, Sharon Horgan, Tony Hale, Sam Richardson, and Jason Mantzoukas, with Bresha Webb, Greta Lee, and Maria Bamford in guest roles. The series follows a group of neighborhood pets and stray animals as they work through their issues inside and outside their therapy group. Honey (Kudrow), a standard poodle, opens her living room for the group to come and support each other through the misery, mayhem, and majesty that is being a pet. Honey also struggles with her own problems, such as her arranged (by her human) marriage with Chief (Faxon), a sloppy St. Bernard who enjoys eating socks and licking himself.

What do you think? Which season one episodes of the Housebroken TV series do you rate as wonderful, terrible, or somewhere between? Do you think that Housebroken should be cancelled or renewed for a second season on FOX? Don’t forget to vote, and share your thoughts, below.

*8/10/21 update: Housebroken has been renewed for a second season.

I loved HOUSEBROKEN what a funny Adult like comedy. So different I was so happy to hear that it was renewed. I really think with the proper promotion this could be the next Simpson’s. The writers and actors are on point.

Do people watch a lot of network tv in the summer? I recorded it last night, but didn’t have a chance to watch it yet. The weather is too nice, and its still light outside. I was disappointed that fox is putting Duncanville in the summer, when i rarely watch tv

Today is now
Reply to  Kelly

Sad because it’s series is not as bad as you think it is. There’s more to life than superhero comic movies and TV shows