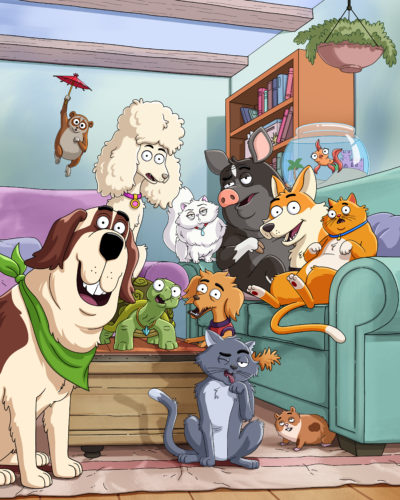 The series follows a group of neighborhood pets and stray animals as they work through their issues inside and outside their therapy group.

Honey (Kudrow), a standard poodle, opens her living room for the group to come and support each other through the misery, mayhem, and majesty that is being a pet. Honey also struggles with her own problems, such as her arranged (by her human) marriage with Chief (Faxon), a sloppy St. Bernard who enjoys eating socks and licking himself.

The support group also includes Shel (Forte), a sex-positive tortoise with intimacy issues and a knack for choosing unconventional partners; Tabitha (Horgan), an aging Persian cat beauty queen, trying to adjust to life off the cat show circuit; The Gray One (Mantzoukas), a street smart cat who lives with about thirty other cats and has his one eye on Tabitha; Chico (Richardson), a chonky, co-dependent and very naive cat; and the group’s newest member, Diablo (Hale), an anxious, sweater-wearing terrier whose OCD causes him to hump everything twice.

Among the group’s other members are Elsa (DuVall), a power-hungry, know-it-all Corgi, and fake service dog, who drives Honey crazy; Nibbles (Webb), a psychopathic hamster who is mourning the loss of her mate (whose face she ate…and everyone knows it); Max (Hale), George Clooney’s pig, a former actor and current status-obsessed a-hole; Bubbles (Lee), a horny, teenage goldfish who lives with Honey and Chief, and heckles the animals any chance she gets; Tchotchke a silent, and possibly magical, slow loris with a mysterious past, who uses a tiny cocktail umbrella to express his emotions; and Jill (Bamford), Honey and Chief’s human owner.

The series an irreverent look at human behavior, but told through the filter of an offbeat group of neighborhood pets. Throughout the series, the show centers on the pets’ dysfunctional relationships and their skewed worldview, while exploring relevant societal issues in fun and unique ways.

What do you think? Do you like the Housebroken TV show? Do you think it should be cancelled or renewed for another season?