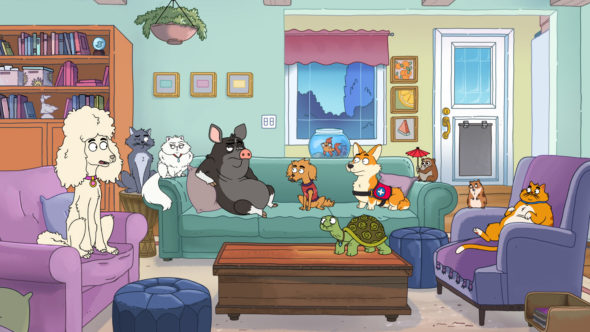 Can Honey and her friends find happiness? Has the Housebroken TV show been cancelled or renewed for a second season on FOX? The television vulture is watching all the latest cancellation and renewal news, so this page is the place to track the status of Housebroken, season two. Bookmark it, or subscribe for the latest updates. Remember, the television vulture is watching your shows. Are you?

Airing on the FOX television network, the Housebroken TV show stars Lisa Kudrow, Will Forte, Clea DuVall, Nat Faxon, Sharon Horgan, Tony Hale, Sam Richardson, and Jason Mantzoukas, with Bresha Webb, Greta Lee, and Maria Bamford in guest roles. The series follows a group of neighborhood pets and stray animals as they work through their issues inside and outside their therapy group. Honey (Kudrow), a standard poodle, opens her living room for the group to come and support each other through the misery, mayhem, and majesty that is being a pet. Honey also struggles with her own problems, such as her arranged (by her human) marriage with Chief (Faxon), a sloppy St. Bernard who enjoys eating socks and licking himself.

The first season of Housebroken averaged a 0.26 rating in the 18-49 demographic and 911,000 viewers in the live+same day ratings (including DVR playback through 3:00 AM). While these numbers don’t include further delayed or streaming viewing, they are a very good indicator of how a show is performing, especially when compared to others on the same channel. There can be other economic factors involved in a show’s fate, but the higher-rated series are typically renewed and the lower-rated ones are cancelled. Find out how Housebroken stacks up against other FOX TV shows.

Will FOX cancel or renew Housebroken for season two? The network has had mixed success with its animated series. Though the series is being given a summer run, it has a stellar voice cast so I’m leaning toward a renewal. I’ll update this page with breaking developments. Subscribe for free alerts on Housebroken cancellation or renewal news.

8/10/21 update: Housebroken has been renewed for a second season.

What do you think? Are you glad that the Housebroken TV show has been renewed for a second season? How would you feel if FOX had cancelled this TV series, instead?

Very fun show. I don’t usually do adult animated programs, but I love Lisa Kudrow and am glad I gave it a shot. I hope it sticks around for a while.

I love the show. The frog licking episode was the funniest.