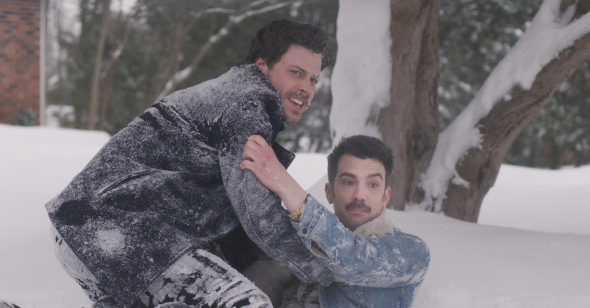 Will the Moody house survive having the entire family under one roof in the second season of The Moodys TV show on FOX? As we all know, the Nielsen ratings typically play a big role in determining whether a TV show like The Moodys is cancelled or renewed for season three. Unfortunately, most of us do not live in Nielsen households. Because many viewers feel frustration when their viewing habits and opinions aren’t considered, we invite you to rate all of the second season episodes of The Moodys here. *Status update below.

A FOX family comedy, The Moodys TV show stars Denis Leary, Elizabeth Perkins, Jay Baruchel, Chelsea Frei, and Francois Arnaud. Guests include Maria Gabriela de Faria, Gerry Dee, and Josh Segarra. Based on an Australian TV show, this series revolves around the Moody family of five. They are a tight-knit, though slightly dysfunctional, group and each has his/her own eccentricities. Sean Moody Sr. (Leary) and his wife, Ann (Perkins), are parents of three grown children — the youngest and “creative one”, Dan (Arnaud); overachiever middle-child Bridget (Frei); and Sean Jr. (Baruchel), is the eldest sibling and the “screw-up”. Season two picks up with Sean Sr. contemplating retirement while Sean Jr. takes over the family HVAC business. In reality, however, Ann has no intention of leaving her new psychology practice, and Sean Jr. continues to brew up schemes to get rich quick. Bridget, who is in the midst of a divorce, returns home while her fancy new townhouse is being renovated; and Dan leaves Brooklyn for Chicago to live with his girlfriend, Cora (de Faria), only to realize the relationship is moving too quickly. Once again, the Moodys are all under the same roof as “one big, happy family”.

What do you think? Which season two episodes of The Moodys TV series do you rate as wonderful, terrible, or somewhere between? Do you think that The Moodys should be cancelled or renewed for a third season on FOX? Don’t forget to vote, and share your thoughts, below.

I cannot believed you canceled this great show and still produce and replay all the other **** you do!!! #%$@ You know it was put in a terrible time slot!!! Just get BOTH seasons available to purchase so we can watch them again and again!!!!!!

Damnit! What are Fox Executives thinking? DON’T CANCEL The Moody’s!!!

Please, please, PLEASE air the remaining episodes and renew The Moody’s for a third season.

Better yet, permanently move The Moody’s to Amazon Prime, HBO Max, Hulu, Netflix or some other platform and continue the series!

What is so wrong with a comedy series with great character development, excellent writing and actors who know what they’re doing?

I mean, WAKE UP FOX so-called Executives! Get a clue!

Please don’t cancel the Moody’s. I think it could be another Schitt’s Creek if you give it a chance
Many of us bought the first season just so we could watch it.

Hopefully another network picks up this series! It’s so good, sarcastic funny and somewhat relatable. Most of the new shows today the actors aren’t very good but I can honestly say I loved this show. Great writing and superb acting!

Noooo!
Its such a good show! So funny. Who wants funny when we can have off the wall corny 911 situations