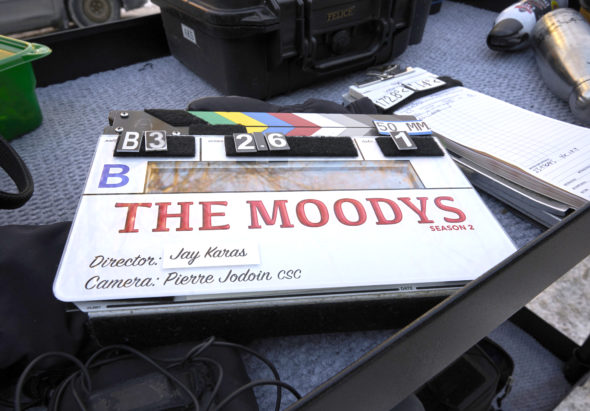 FOX is revisiting the Moody clan. The network has decided to air the remaining episodes of the second season of The Moodys. Has the TV show been cancelled or, could there be a third season?

A single-camera family sitcom, The Moodys stars Denis Leary, Elizabeth Perkins, Jay Baruchel, Chelsea Frei, and Francois Arnaud. Guests include Maria Gabriela de Faria, Gerry Dee, and Josh Segarra. Based on an Australian TV show, this series revolves around the Moody family of five. They are a tight-knit, though slightly dysfunctional, group and each has his/her own eccentricities. Sean Moody Sr. (Leary) and his wife, Ann (Perkins), are parents of three grown children — the youngest and “creative one”, Dan (Arnaud); overachiever middle-child Bridget (Frei); and Sean Jr. (Baruchel), is the eldest sibling and the “screw-up”. Season two picks up with Sean Sr. contemplating retirement while Sean Jr. takes over the family HVAC business. In reality, however, Ann has no intention of leaving her new psychology practice, and Sean Jr. continues to brew up schemes to get rich quick. Bridget, who is in the midst of a divorce, returns home while her fancy new townhouse is being renovated; and Dan leaves Brooklyn for Chicago to live with his girlfriend, Cora (de Faria), only to realize the relationship is moving too quickly. Once again, the Moodys are all under the same roof as “one big, happy family”.

The second season of The Moodys averages a 0.26 rating in the 18-49 demographic and 1.09 million viewers. Compared to season one, which aired during the Christmas season of 2019, that’s down by 47% in the demo and down by 43% in viewership.

The Moodys is one of FOX’s lowest-rated scripted series of the season and was pulled after five of the season’s episodes had aired. The show was replaced by the puppet satire program Let’s Be Real and it’s performed even worse in the ratings, ranking at the bottom of the FOX chart. Let’s Be Real has just two episodes left to air.

The Moodys will return to FOX on Sunday, June 6th and will wrap its second season on June 20th (Father’s Day).

While it’s nice that the network is airing the remaining episodes, it seems highly unlikely that this family comedy will be renewed for a third season. Right now, it looks like the network will have just two scripted comedies next season — season two of Call Me Kat and new entry Pivoting — so it doesn’t look like the network would have a show to pair with more of The Moodys if it were to be renewed.

What do you think? Do you enjoy The Moodys TV series? Do you plan to watch the remaining episodes? Should it be renewed for a third season?

Love this show!
I love that it’s on regular TV!
Keep it going! Pleeeeeaaase.

LOVE THE MOODY’S. NO FUNNIER COMEDIAN THAN DENNIS LEARY. THIS FAMILY IS RELATABLE TO ALL FAMILIES WITH OLDER KIDS IN THE CHICAGO AREA. IT’S A BRILLIANTLY WRITTEN AND AMAZINGLY FUNNY SHOW!!!! #RENEWSEASON3

I really liked the Moody’s. It’s so hard to find good comedy sitcoms lately. The Moody’s always cracked me up! Loved the Christmas series. I really hope they don’t cancel it.

KEEP THIS SHOW GOING! LOVED the Christmas episodes then stumbled on the new ones by chance because Fox did zero advertising. So glad I did! Great funny show! Don’t cancel The Moodys!

I have only seen two episodes of The Moodys but really loved the show. I’m hoping that Fox will renew this show and perhaps air the first season again so I can catch up. Well written with a great cast!!

Why would you take this show off? It is fabulous! Every actor is phenomenal. The cast has the best chemistry. I was so excited about season 2 and now you’re making us wait for the final episodes, why? Also you’re poling the wrong people.
Very disappointed.

The Moodys delivers laughter in a time when laughter is the medicine most needed. The chemistry of acting talent shines.Great gift, priceless.

Really enjoyed The Moodys, a funny nonfunctional but somehow loving functional family. Gives hope to the rest of us!

I love this show, was so excited to see it got a second season after the holiday season . Love Leary and Perkins and the “kids” are all funny and entertaining , please don’t cancel

This is such a high-quality show, I love it. But I don’t think Fox promotes it enough, or at all.

Might not but probably will renew The Moodys which is a disappointing show to begin with and yet Prodigal Son is canceled??! Makes absolutely no sense! I guess Fox feels it’s better to appeal to the moronic demographics than those with brains that work. Fox is the big loser for the choices they make.

The show is very relatable. They do some funny stuff. I hope it does not get canceled.

It boggles the mind: trash like Chad gets renewed for a second season while quality comedy like this gets cancelled.

The is Moody’s is fun & quirky. Denis Leary & Elizabeth Perkins are comedy gold. Their 3 “kids” are Canadian superstars. Thanks for airing the remaing episodes. The Moody’s is the best show on FOX.

Loved the Moodys, great series, should be renewed