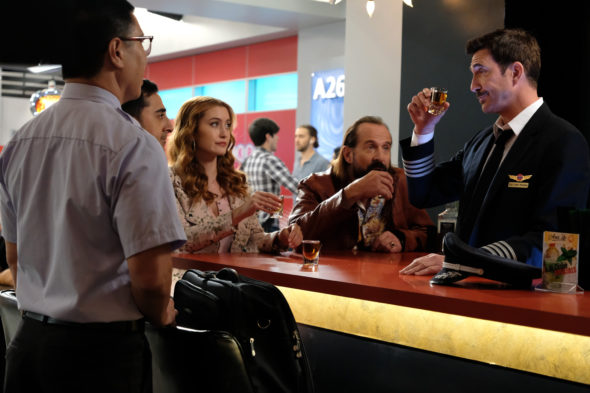 While it’s not a season two renewal, it is better than a cancellation. After just one outing, FOX has ordered three more episodes of its new LA to Vegas TV show. The comedy just premiered on January 2nd, and the second episode hits the airwaves, tonight. The new order brings the season one episode count up from 12 to 15.

The LA to Vegas TV series premiere earned a 1.10 rating in the 18-49 demographic and garnered 3.76 million viewers. Its demo numbers mean LA to Vegas currently ranks 10th out of the 18 scripted FOX TV shows we’re tracking. When sorted by total audience size, it rises two spots to eighth place.

Although FOX hasn’t issued a press release on the additional LA to Vegas episode order, Deadline has reported it.

What do you think? Have you watched the LA to Vegas TV show premiere? Will you watch the second episode tonight? So far, would you like to see it cancelled or renewed for season two on FOX?

Any one that has flown will love the humor now of the situations that wern’t so funny at the time they went thru similar ones. Can’t wait for more!

Renew renew renew!!! My husband and I love this show.

We love this show. RENEW IT PLEASE!!

Love this funny, quirky show ! It provides a humorous respite from all the other depressing stuff on TV. Looking forward to Season 2…RENEW!!!!

I love this show! It’s the only thing I watch! Really hoping for a season 2!

Love “LA to Vegas, good clean humor. In my opinion beats all the crap they keep renewing. Although “Lethal Weapons” is our other favorite.

The only comedy I watch. Great lines causing laugh out loud response.
So funny in the vein of the classic movie Airplane. Hope it’s renewed!

We love this show! It is one of the few shows on TV we look forward to watching each week. Somehow it manages to be laugh-aloud funny despite walking a fine line of silliness. Please renew this show – especially for all of us involved in aviation and/or experience with airlines (including as passengers)

I really like it. I hope there is a second season.

Love it! Best show ever since 30 Rock and The Office. Don’t cancel!!