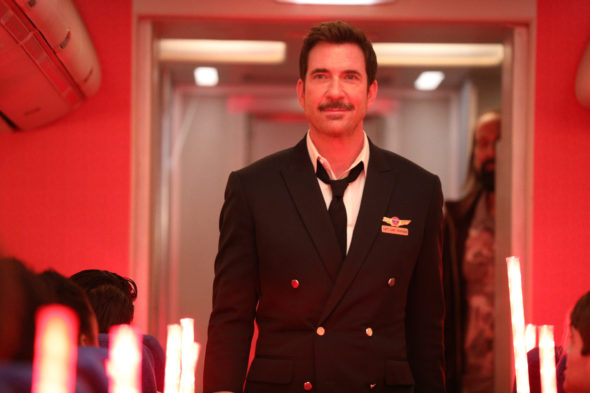 While nothing is official, we hear the LA to Vegas TV show is inching closer to a second season on FOX. The network hasn’t made an announcement, but a source indicates some initial steps in season two pre-production have already been taken, in advance of kicking off production over the summer. Earlier this week, we reported creator Lon Zimmet and Steve Levitan were already working on a way to “make some noise” and land a season two renewal. Perhaps they have done just that.

A FOX workplace comedy, LA to Vegas stars Dylan McDermott, Kim Matula, Ed Weeks, Nathan Lee Graham, Olivia Macklin, Peter Stormare, and Amir Talai. The sitcom centers on a weekly Jackpot Airlines roundtrip flight from Los Angeles to Las Vegas. The first season kicked off in January with decent numbers and scored a bigger episode order a week later, but struggled in the ratings as the season wore on.

The first season of LA to Vegas averaged a 0.73 rating in the 18-49 demographic and 2.32 million viewers. Of the 20 scripted FOX TV shows we’ve been tracking during the regular 2018-19 television season, LA to Vegas ranks 16th when we sort by demo numbers and rises only one slot to 15th place, in terms of average total viewers.

What do you think? Did you watch the first season of the LA to Vegas TV series? Should FOX cancel or renew this TV show for a second season?

Watched every episode of LA to Vegas and loved it!! Please renew it for another season.

I enjoy the show. As it’s supposed to be a vehicle for Dylan McDermott to star in his character is the weak link of the show.