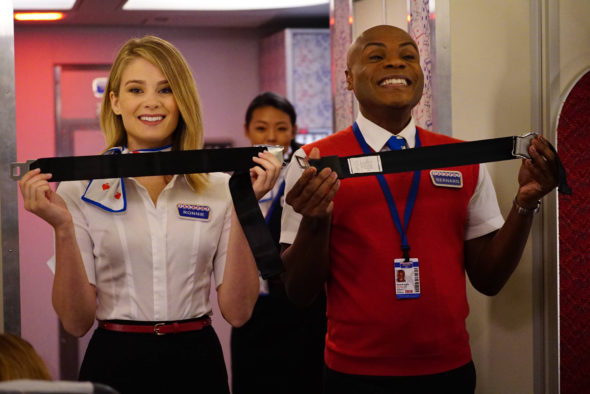 How’s the turbulence during the first season of the LA to Vegas TV show on FOX? As we all know, the Nielsen ratings typically play a big role in determining whether a TV show like LA to Vegas is cancelled or renewed for season two. Unfortunately, most of us do not live in Nielsen households. Because many viewers feel frustration when their viewing habits and opinions aren’t considered, we’d like to offer you the chance to rate all of the LA to Vegas season one episodes here.

What do you think? Which season one episodes of the LA to Vegas TV series do you rate as wonderful, terrible, or somewhere between? Should FOX cancel or renew LA to Vegas for a second season? Don’t forget to vote, and share your thoughts, below.

Finally a show that makes you belly laugh!

Love this show the cast is great!!This could be the next Cheers!! the final episode was great I did laugh Out loud every episode. interesting unpredictable with a sharp, quick wit it’s like a catchy song you want to hear/see it again. I’ll be very disappointed if it gets cancelled it’s my family’s new favorite show I hope another Network is smart enough so that it gets picked up

We love this show! The writing, the characters and the actors are hilarious. We look forward to watching and laugh out loud every episode.

Love this show!! All the characters are hilarious & work great together. The only new show that I’ve picked up this year. I really hope Fox renews this. I definitely think it will get even better with another season!! Come on!!!

We really enjoy this show. Lots of good laughs. All of the characters are funny.
One of the best comedies we watch!

I loved the charge to use the restroom. The funniest part was when they said next week they would be giving flu shots. LOL

Who was man playing the cheater in the affair but really was air Marshall? I like the show

great show looking forward to next one

Kim Matula nails it with her comedic timing, in LA to Vegas! Show is hilarious.
Also watched a movie that was recently released that she stars in called “Maybe Someday” found it on iTunes , its awesome and her performance is Stellar

with all of the terrible politics and division we are currently facing in our country, LA to Vegas came to our family room and allowed us to laugh throughout the entire show. Kim Matula has amazing comedic timing, she is great in all she has done.

Also watched her in a Movie on iTunes called “Maybe Someday”, she was equally awesome in that show and it too is worth the watch.
She is a great actor and my entire family are looking forward to the next show!!
Thanks for the laughs
Rick