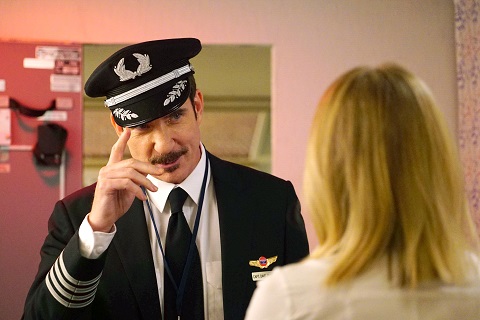 “Alright gentlemen, it’s time to get high.” FOX has just released a new preview for their upcoming TV show LA to Vegas.

From executive producers Will Ferrell and Adam McKay, the comedy “is an ensemble workplace comedy about an airline crew and the eccentric passengers who, every weekend, take the roundtrip flight from Burbank to Las Vegas with one goal in mind: to come back a winner.” The cast includes Ed Weeks, Dylan McDermott, Kim Matula, Nathan Lee Graham, Olivia Macklin, and Peter Stormare.

LA to Vegas is slated to premiere on FOX in early 2018.

Check out the new preview and more info below:

From executive producers Will Ferrell (“Anchorman: The Legend of Ron Burgundy,” “Elf”), Adam McKay (“The Big Short”), Lon Zimmet (“Unbreakable Kimmy Schmidt”) and Steve Levitan (“Modern Family”), LA TO VEGAS is a workplace comedy about an airline crew and the eccentric passengers who, every weekend, take the roundtrip flight from Los Angeles to Las Vegas with one goal in mind – to come back a winner. It won’t be easy, but this unlikely group of miscreants and dreamers will eventually go from being strangers on a plane to a supportive, if unconventional, family… well, at least from Friday to Sunday. The series stars Kim Matula (“UnREAL”), Ed Weeks (“The Mindy Project”), Nathan Lee Graham (“The Comeback,” “Hitch”) and Olivia Macklin (“The Young Pope”) with Peter Stormare (“The Big Lebowski”) and Emmy Award nominee and Golden Globe winner Dylan McDermott (“The Practice,” “American Horror Story”).

LA TO VEGAS is produced by 20th Century Fox Television in association with Gary Sanchez Productions. The series was written by Lon Zimmet, who also serves as an executive producer, along with Will Ferrell, Adam McKay, Chris Henchy, Owen Burke and Steve Levitan, who directed the pilot. Josh Bycel, Jonathan Fener and Jeff Morton also serve as executive producers.

What do you think? Are you a fan of FOX’s comedies? Will you watch LA to Vegas?