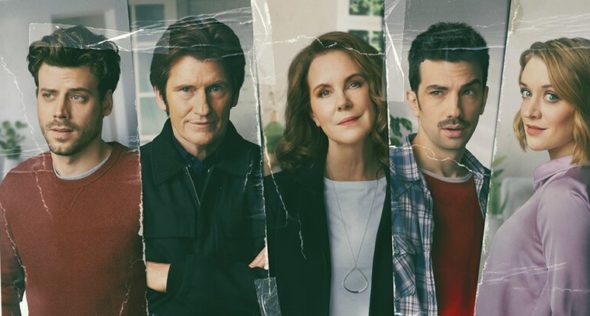 The first season of The Moodys was described as an “event series” and, though the ratings weren’t very good, FOX ordered a second season. Will the viewership improve since the show’s no longer airing just ahead of the Christmas holiday, when TV ratings are typically lower? Will The Moodys be cancelled or renewed for season three? Stay tuned. *Status update below.

A family comedy series, The Moodys stars Denis Leary, Elizabeth Perkins, Jay Baruchel, Chelsea Frei, and Francois Arnaud. Guests include Maria Gabriela de Faria, Gerry Dee, and Josh Segarra. Based on an Australian TV show, this series revolves around the Moody family of five. They are a tight-knit, though slightly dysfunctional, group and each has his/her own eccentricities. Sean Moody Sr. (Leary) and his wife, Ann (Perkins), are parents of three grown children — the youngest and “creative one”, Dan (Arnaud); overachiever middle-child Bridget (Frei); and Sean Jr. (Baruchel), is the eldest sibling and the “screw-up”. Season two picks up with Sean Sr. contemplating retirement while Sean Jr. takes over the family HVAC business. In reality, however, Ann has no intention of leaving her new psychology practice, and Sean Jr. continues to brew up schemes to get rich quick. Bridget, who is in the midst of a divorce, returns home while her fancy new townhouse is being renovated; and Dan leaves Brooklyn for Chicago to live with his girlfriend, Cora (de Faria), only to realize the relationship is moving too quickly. Once again, the Moodys are all under the same roof as “one big, happy family”.

4/23 update: You can see the latest night’s ratings in context.

For comparisons: Season one of The Moodys on FOX averaged a 0.48 rating in the 18-49 demographic and 1.92 million viewers.

What do you think? Do you like The Moodys TV series on FOX? Should it be cancelled or renewed for a third season?

I have always enjoyed watching Denis Leary and really loud to the show…I kept it in my recording manager in case it came back from last year… Fox doesn’t advertise it much but thank God for Directv DVR! I am really bummed that there will not be a season three… I can’t believe you keep on some other really stupid shows and this one was really really funny …very subtle humor, but very very funny

Replacing this funny, quirky show with a puppet show is unacceptable! We loved the characters, and the acting was superb. We hardly watch network shows anymore because they are either just extensions of other shows, reality shows, game shows, or the writing is horrendous! We usually watch sports because it ends up being the best thing on tv most evenings. It’s extremely sad that there’s all of these channels available with nothing worthy to watch being offered for the viewers. Wake up FOX!

They have too keep the series going.. it’s one of our favorite shows as a family. We haven’t laughed this hard in a long time. FOX please bring it back

It is horrific scheduling on Fox’s part, but everyone needs to quit saying Moodys is cancelled. It’s back June 6th.

I loved the Christmas episodes, and am thoroughly enjoying the new ones. I really hope it gets renewed!

I watched the holiday event series and enjoyed it. I was pleased when I learned it had been renewed for a second season. The cast is great and Denis Leary is awesome. I am a fan and will continue watching. I am hoping for a season 3.

I saw it for the first time tonight after Last Man Standing. I don’t mind watching it again but I didn’t really have much of a reaction to it. I don’t mind understated comedy but I just didn’t feel like much was happening. The cast is good though.

I watched the whole hour, with modest expectations, and was pleasantly surprised when I laughed a few times! I plan to continue to watch with guarded optimism.