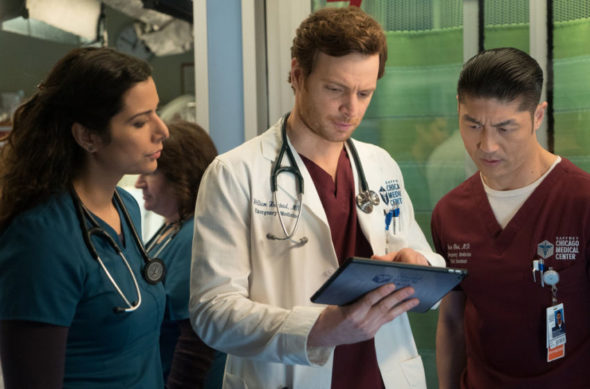 From Emmy Award-winning executive producer Dick Wolf (the “Law & Order” and “Chicago” brands), “Chicago Med” is an emotional thrill ride through the day-to-day chaos of the city’s newest state-of-the-art trauma center and into the lives of the courageous doctors, nurses and staff who hold it all together.

April Sexton (Yaya DaCosta) is a smart, bold and intuitive ER nurse navigating the hospital politics of dating a doctor and co-worker. Maggie Lockwood (Marlyne Barrett) is the confident charge nurse and the eyes, ears and brain of the emergency department. Joining the team this season is rival Dr. Ava Bekker, a perennial thorn in the side of Dr. Rhodes while his girlfriend and epidemiologist Robin Charles (guest star Mekia Cox) recovers from her rare illness. April’s ambitious brother Noah Sexton (guest star Roland Buck III) joins the ER as its newest physician.

Together, they will confront Chicago’s most critical medical cases and challenging ethical dilemmas with courage, compassion and state-of-the-art treatment. Inspired by ripped-from-the-headlines cases, “Chicago Med” will weave cutting-edge medicine with the personal drama that comes with working in such a high-intensity environment. Through it all, familiar faces from “Chicago Fire,” and “Chicago P.D” will intertwine with Chicago’s finest medical heroes.

“Chicago Med” is produced by Universal Television and Wolf Entertainment.”

I love this show too, especially the “cross-over” episodes. This news makes me very happy.

Thank You! So glad Chicago Med is coming back. Was worried for sure.

I watch all of the chicagos and wanted to know where Med was have not missed a episode of fire, os, or med even if I have to record if working

So happy Chicago Med will be back. We all love the show