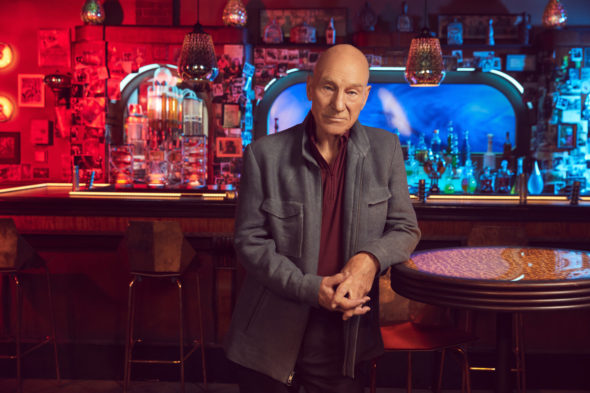 Jean-Luc Picard’s newest adventures won’t see a fourth season. The Star Trek: Picard TV series was renewed for a third season by Paramount+ back in September. Production wrapped on season three earlier this week and it turns out, that will be the end. Season two is currently being released on Thursdays.

The Star Trek: Picard TV show is a follow-up to Star Trek: The Next Generation. It stars Sir Patrick Stewart, Alison Pill, Jeri Ryan, Michelle Hurd, Evan Evagora, Orla Brady, Isa Briones, Santiago Cabrera, and Brent Spiner with Annie Wersching and special guest stars Whoopi Goldberg and John de Lancie. The series takes place in the latter part of the 24th Century and picks up two decades after the last time viewers saw Jean-Luc Picard (Stewart), as Starfleet Captain of the U.S.S. Enterprise. Season two takes Picard and his crew on a bold new journey — into the past. Picard must enlist friends both old and new to confront the perils of 21st century Earth in a desperate race against time to save the galaxy’s future while facing the ultimate trial from one of his greatest foes.

Executive producer and writer Christopher Monfette tweeted about production wrapping and also alluded that the series was coming to a close on Monday night.

And that’s a wrap on Season Three of #StarTrekPicard. As you watch and enjoy Season Two just know — the next and final chapter in Picard’s story is a truly remarkable thing. Beyond thankful to @TerryMatalas, the cast, crew and all our extraordinary writers who made it possible.

Later, Ryan also tweeted about the series production wrap and she later confirmed that Star Trek: Picard won’t have a fourth or a fifth season.
https://twitter.com/JeriLRyan/status/1501217582325633030

Nope, it was always intended to be 3 and done. https://t.co/UauYW9juhj

In an interview with TrekMovie, executive producer and showrunner Akiva Goldsman noted that, while the series is coming to an end, the door is left open for more adventures for Jean Luc Picard should Stewart be interested.

What do you think? Have you been watching the Star Trek: Picard TV series on Paramount+? Are you disappointed that the series will end with its third season or, do you think that three seasons will be enough?

I agree Picard is too old to be doing what he is doing. Season 2 better than the 1st season. I like having Jeri Ryan back but her character makes no sense being where she is at all. She was just written in to draw viewers from her Voyager days. But I’ll watch till the end. We are diehard Trek fans.

I have followed Star Trek since the beginning. I agree with the comments below. It appears Jean Luc is a bit too old for the lead. Other actors are very good, but. Scripts are weak. Also agree, they are trying to make it too woke, so actually fail by over doing it. Rather than trying detailed character development, give us complex characters, but let it role as in real life. Some things remain a mystery.

Unfortunately I’m watching Season 2. The show is terrible, apart from having ex. Star Trek members, stories make no sense, it’s incredibly depressing, gloomy, badly written, doesn’t follow any Star Trek canon or principles. Gene Roddenberry must be spinning in his grave with all the woke nonsense.

Star Trek used to be about hope. Shameful really

We need more Picard or something similar….. Love it

oh well, suppose there’s a reason we don’t know about.

I think season one was slow, I am not a dan of a whole 8 shows dedicated to the same thing. Had it been 2 or 4 episodes that is doable.

Paramount should consider Axanar. It would have been better than Discovery, which imo was boring.

should have stopped after the awful season 1, where beloved characters were already butchered

Love Star Trek, and the TNG was awesome. As much as I’ve wanted to like the Picard series, it’s just not working. He is just too old to be the lead. I am enjoying Star Trek Discovery.

Can’t say I’m all that surprised. Patrick Stewart is in his 80s now, and he’s visibly aged a lot recently. Wouldn’t be surprised if his doctors told him to “slow down”.

Unlike me, he’s not immortal, so I had a feeling this wouldn’t be a “5 year mission” (or longer, like his old series was).

Oh no this is only show Star Trek tv series streaming love the original series way better William Shatner nothing compare need to stop making movies and tv show need to end quickly tired of it.