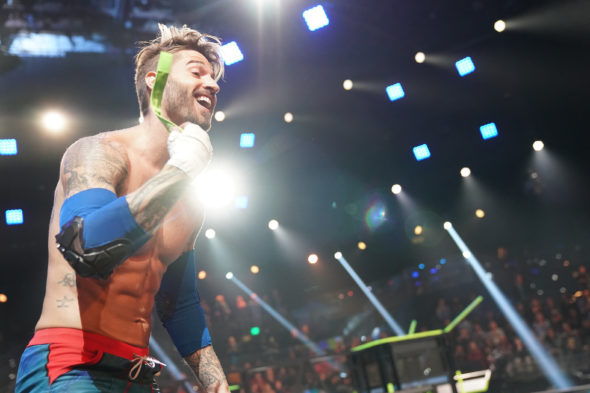 Is this new show the “it” that viewers have been looking for? Has the Ultimate Tag TV show been cancelled or renewed for a second season on FOX? The television vulture is watching all the latest cancellation and renewal news, so this page is the place to track the status of Ultimate Tag, season two. Bookmark it, or subscribe for the latest updates. Remember, the television vulture is watching your shows. Are you?

Airing on the FOX television network, the Ultimate Tag TV show is co-hosted by NFL siblings JJ Watt, TJ Watt, and Derek Watt. It’s based on the classic playground game of chase. Everyday citizens compete in the game and must vault, dodge, tumble and dive over various epic, three-dimensional moving courses. Their one simple goal is to not get caught. As competitors progress, they are challenged to take on even more extreme courses and earn points for their performance in each game. Chasing the contestants every step of the way are a variety of resident “professional” Taggers, larger-than-life characters who have a range of jaw-dropping athletic skills. These Taggers are intermittently released into the course, and only the contestants who can outlast them the longest will secure their place in the championship game and a chance at a big cash prize.

The first season of Ultimate Tag averaged a 0.53 rating in the 18-49 demographic and 1.81 million viewers. Find out how Ultimate Tag stacks up against other FOX TV shows.

Will FOX cancel or renew Ultimate Tag for season two? The ratings got off to a positive start (thanks in part to having the Masked Singer finale as a lead-in), but later episodes have really dropped. I don’t believe this series will be renewed. I’ll update this page with breaking developments. Subscribe for free alerts on Ultimate Tag cancellation or renewal news.

What do you think? Do you hope the Ultimate Tag TV show will be renewed for a second season? How would you feel if FOX cancelled this TV series, instead?

Glad. Cause they 100000000% ripped off world chase tag. And honestly I think they need to be sued

Good. Ultimate Tag was a direct rip off – slogan and all – of World Chase Tag (Which was started in 2016). Fox BLATANTLY stole it, and nearly ruined the livelihood of quite a few traceurs.

We loved ultimate tag and we are disappointed that it was cancelled! Please bring it back!

LOVE LOVE LOVE Ultimate Tag! It’s so fun, and inspires me to workout. I can’t believe how I became such a fan of all the taggers personas. JJ Watt and his Bros do a fantastic job of Hosting, love to watch their banter. Please please please renew for Season 2! And don’t change a thing, the format is a winning formula!

Love the show. I really hope there is a season 2. The kid and the flow are amazing.

Please bring back ultimate tag for a second season.. my whole family and I love the characters, love the show it has become our new family pastime. #ultimatetag #loveultimatetsg

I love the show and have not seen anything quite like it. Producers must be creative and do a change up of the course and I want to marry Atomic Ant.

I hope it is renewed love this show!!!
Let’s keep it going and maybe add some new tracks or/and events to it would be nice to see something new but overall great show

Ultimate Tag Is Like Nothing Else On TV. Is Needs To Be Picked Up For A Season 2 By Fox.

Yes please bring it back!! I haven’t seen nothing like this since I was a kid, this is off the hook we played tag like this climbing in tree’s jumping over fences running through the creek just to get away, I want to be a contestent on the show they won’t ever catch me and I know it. To the watt brother’s please reach out I want to get down for real.

I want an another season of ultimate tag , I want to tryout for the next season, I want to prove to my parents that I can handle the pressure, the Watt Brother’s are best hosts for the show, if I make it to the show, I want to meet the host and all of the taggers.