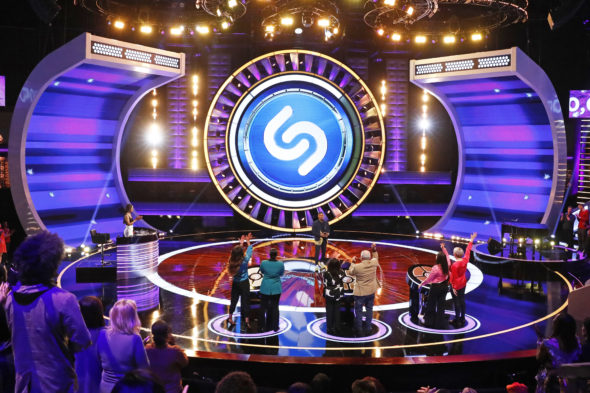 Can players beat the app? Has the Beat Shazam TV show been cancelled or renewed for a fifth season on FOX? The television vulture is watching all the latest cancellation and renewal news, so this page is the place to track the status of Beat Shazam, season five. Bookmark it, or subscribe for the latest updates. Remember, the television vulture is watching your shows. Are you?

Airing on the FOX television network, the Beat Shazam series is hosted by Jamie Foxx. His daughter, Corinne Foxx, serves as the Deejay. The competition features three teams of two players as they race against the clock, and each other, to identify song selections. During each round, Jamie Foxx presents a choice of two musical categories. The object is to be the first team to correctly identify the song’s title. While low-scoring teams are eliminated, the team which banks the most money will ultimately advance to compete against the Shazam app, for a chance to win a $1 million prize.

The fourth season of Beat Shazam averaged a 0.44 rating in the 18-49 demographic and 1.87 million viewers. Compared to season three, that’s down by 27% in the demo and down by 24% in viewership in the live+same day ratings (including DVR playback through 3:00 AM). While these numbers don’t include further delayed or streaming viewing, they are a very good indicator of how a show is performing, especially when compared to others on the same channel. There can be other economic factors involved in a show’s fate, but the higher-rated series are typically renewed and the lower-rated ones are canceled. Find out how Beat Shazam stacks up against other FOX TV shows.

Will FOX cancel or renew Beat Shazam for season five? The ratings have been okay and the show is well-established so I think it will be renewed. I’ll update this page with breaking developments. Subscribe for free alerts on Beat Shazam cancellation or renewal news.

4/6/22 Update: FOX has renewed Beat Shazam for a fifth season.

What do you think? Are you glad that the Beat Shazam TV show has been renewed for a fifth season? How would you feel if FOX had cancelled this TV series, instead?

Beat Shazam is one of the best game shows to air in YEARS & one of the best original musical game shows I’ve ever watched (and I am over 50 years old). If they would air at the same day & time each season the ratings would absolutely very much much higher!

One of the best game shows on any network .

I would say the constantly changing dates and times make it hard to get consistent ratings.