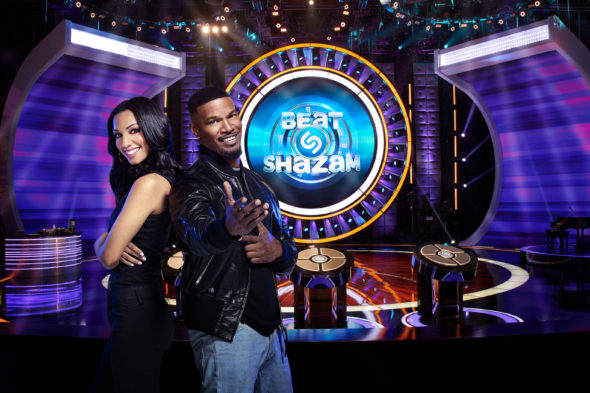 The race to beat the Shazam app will continue. FOX has renewed the Beat Shazam TV series for a fifth season which will debut on Monday, May 23rd. The fourth season of 10 episodes finished airing in August 2021.

An interactive, musical game show, the Beat Shazam series is hosted by Jamie Foxx and his daughter, Corinne Foxx, serves as the Deejay. The competition features three teams of two players as they race against the clock, and each other, to identify song selections. During each round, Jamie Foxx presents a choice of two musical categories. The object is to be the first team to correctly identify the song’s title. While low-scoring teams are eliminated, the team which banks the most money will ultimately advance to compete against the Shazam app, for a chance to win a $1 million dollar prize.

Airing on Thursday nights, the fourth season of Beat Shazam averaged a 0.44 rating in the 18-49 demographic and 1.87 million viewers. Compared to season three, that’s down by 27% in the demo and down by 24% in viewership in the live+same day ratings (including DVR playback through 3:00 AM). Compared to the network’s other summer shows, Beat Shazam was a middle-of-the-road performer.

The upcoming fifth season will include a special episode featuring teachers. Another installment will be dedicated to heroes, featuring military members, firefighters, and police officers.

Check out our FOX status sheet to track the network’s new series pickups, renewals, and cancellations. You can find lists of cancelled shows here.
What do you think? Do you enjoy the Beat Shazam TV series? Are you glad that it’s been renewed for a fifth season on FOX? Will you be watching in May?

My husband and I we’re chosen to go to Ireland to folk floor this season. No ever called us and we were excited to know we were going tip compete on the show. Well WE WERE NEVER TOLD THAT WE WEREN’T GOING ON THE SHOW. I’M SO DISAPPOINTED.

Love Beat Shazam. Glad it will be showing in May 2020. My daughter has won os cast in May Ireland. We found out parents and relatives are cancelled for show. We were flying from Boston to Dublin. Kids are upset. Still watch your show!

Found out that series 5 of beat Shazam is on for Ireland but cancelled friends or families to attend. Daughter won as one of the cast in May 2022. Scheduled for kids and parents to go. We watch all repeats!! They are disappointed!

Disappointed that friends and family are cancelled from series 5 beat Shazam Ireland are no longer allowed in may 2022. Why. Made plans to go???!! Daughter is part of cast! Traveling from Boston!

Finally! i was scared it got canceled 🙁 glad its coming back <3

Sure show is back on in May 2o22 but friends and family not allowed. My daughter won cast for that show and parents aren’t allowed now. Traveling from Boston to Ireland. Disappointed for our family. Love your show!