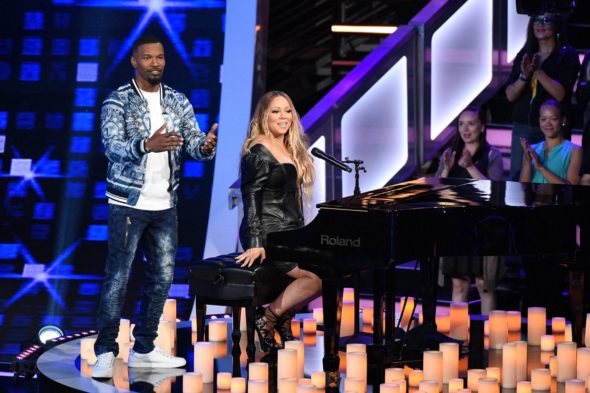 The beat will go on for Jamie Foxx and his FOX TV show. The network has renewed the Tuesday night music competition series, Beat Shazam, for a third season. It seems likely to air next summer.

Season two is currently airing and is averaging a 0.71 rating in the 18-49 demographic with 2.26 million viewers. Compared to the first season, that’s down by 18% in the demo and by 20% in viewership.

There’s been no announcement regarding the fate of sister series, Love Connection, thus far. That Tuesday night series is doing considerably worse in the ratings.

“I am beyond excited that BEAT SHAZAM is getting picked up for a third season,” said Foxx. “Huge thank you’s to our creator, Jeff Apploff, and to Mark Burnett and MGM, as well as the team at FOX for believing in us and giving us the opportunity to help change more peoples’ lives through our shared love of music.”

“Jamie Foxx is a one-of-a-kind entertainer who continues to bring his signature high energy and love of music to this show,” said Rob Wade, President, Alternative Entertainment and Specials, Fox Broadcasting Company. “It really is great fun for the whole family – including Jamie and his daughter, Corinne, our resident deejay. Together with the brilliant Mark Burnett and Jeff Apploff, they have inspired contestants, audience members and viewers at home to play along, and we can’t wait to see the BEAT SHAZAM band re-unite for Season Three.”

“I really love this show and really love working with Jamie and Corinne,” said Burnett. “Season Three will have even more family-friendly music fun that brings families together to both watch the series and to try to BEAT SHAZAM themselves!”

“BEAT SHAZAM is all about giving real people a chance to make a life-changing amount of money for knowing the biggest hits on the radio,” added Apploff. “We cannot wait to see which amazing contestants will take home the $1,000,000 in Season Three!”

BEAT SHAZAM is averaging three million multi-platform viewers. The series ranks among the summer’s Top 20 broadcast programs among Adults 18-49. It is this summer’s most social broadcast game show and has garnered 19 million total engagements across all social channels.

In tonight’s all-new episode of BEAT SHAZAM, “Episode Twelve,” airing from 8:00-9:00 PM ET/PT on FOX, teams of twins attempt to BEAT SHAZAM for the one million dollar grand prize, and Shaquille O’Neal, Lance Bass and Joey McIntyre are special guests. During every all-new episode, viewers also can play along with BEAT SHAZAM’s Webby Award-winning play-at-home game, available exclusively on the Shazam app, for a chance to win a $10,000 cash prize (See Official Rules for full details: https://www.shazam.com/terms/partner/beatshazam/s02).

The interactive music game show pits three teams of two against the clock and each other as they attempt to identify the biggest hit songs of all time. In the end, the team with the most money banked will outlast the competition and go against Shazam, the popular song identification app, for the chance to win one million dollars. The series has featured numerous celebrity guest stars, including Mariah Carey, Snoop Dogg, Odell Beckham, Jr., Michael Bolton, Smokey Robinson, and more.

Shazam is a popular app used by millions of people to magically connect to the world around them. Besides music identification, Shazam helps people discover, interact with and share audio, video, printed or augmented reality content – and lets music fans follow their favorite artists to share in the thrill of discovery. For more information, please visit www.shazam.com.

BEAT SHAZAM was created by Jeff Apploff and Wes Kauble and is produced by Apploff Entertainment and MGM Television in association with Shazam. Jeff Apploff, Mark Burnett, Jamie Foxx, Barry Poznick, Rich Riley and Lauren Zalaznick serve as executive producers. “Like” BEAT SHAZAM on Facebook at facebook.com/BeatShazamFOX. Follow the series on Twitter @BeatShazamFOX and join the discussion using #BeatShazam.

All episodes of BEAT SHAZAM are available on FOX NOW, Hulu and On Demand. To watch episodes on FOX NOW, visit http://fox.tv/WatchBeatShazam.

What do you think? Do you enjoy the Beat Shazam TV show? Are you glad that FOX renewed this music competition series for a third season?

Loved the show! Please bring it back

Love watching the show with my wife and daughter❤️
Glad ratings are still good.
We love to watch and challenge each other.
Looking forward to new season

Love watching with my teenage son

Great news! I love this show and watch it every week.