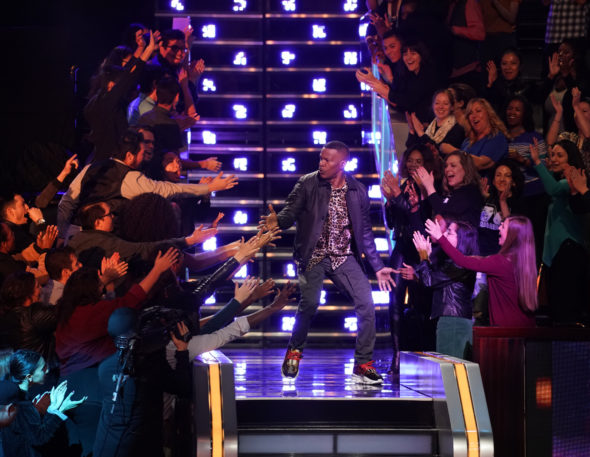 Have the Nielsen ratings beaten Shazam? Is the Beat Shazam TV show cancelled or renewed for a fourth season on FOX? The television vulture is watching for the latest cancellation and renewal news, so this page is the place to track the status of Beat Shazam, season four. Bookmark it, or subscribe for the latest updates. Remember, the television vulture is watching your shows. Are you?

A FOX interactive, musical game show hosted by Jamie Foxx, Beat Shazam features a group of two-player teams, who race against the clock, and each other, to identify song selections. Corinne Foxx returns as the Deejay in season three. During each round, Foxx presents a choice of two musical categories. The object is to be the first team to correctly identify the song’s title. While low-scoring teams are eliminated, the team which banks the most money will ultimately advance to compete against the Shazam app, for a chance at a huge cash prize.

The third season of Beat Shazam on FOX averaged a 0.61 rating in the 18-49 demographic and 2.48 million viewers. Compared to season two, that’s down by 14% in the demo and up by 11% in viewership. Find out how Beat Shazam stacks up against the other FOX TV shows.

Will FOX cancel or renew Beat Shazam for season four? The ratings aren’t very good but this series is likely relatively inexpensive to produce. Right now, I suspect it will be renewed. I’ll keep an eye on the Nielsens and update this page with breaking developments. Subscribe for free Beat Shazam cancellation and renewal alerts.

4/6/22 Update: FOX has renewed Beat Shazam for a fifth season.

What do you think? Are you glad that the Beat Shazam TV show has been renewed for season five? How would you feel if FOX had cancelled this TV series, instead?

I would be devastated because I absolutely LOVE this show and hope to be a contestant!!

I love this show, love me some Jamie Foxx and the fact that you can play along wish I could be a contestant

I absolutely love beat shazam! It brings back so many memories of music throughout our decades of music!

Should be renewed, awesome show, grandson plays along with the show, he loves it and he is 24.

i enjoy this game show.its one of just a few of the shows i like to watch. the whole family loves it.jamie fox is a great host

I can see the ratings picking back up on this show. Its a fun game and i am sure more people will be tuning in !

Please keep it on. Also can we see the scheduled date and time?

PLEASE, PLEASE renew Beat Shazam!! It’s good family fun, entertaining, Jamie and his daughter are wonderful as Host and DJ! Plus I’m constantly testing myself to see if I can Beat Shazam!! My daughter, granddaughter and I absolutely love it!! RENEW PLEASE!

Please don’t cancel Shazam. We look forward to it every week n miss it it when it’s not on. I wish it came on every day. Love it