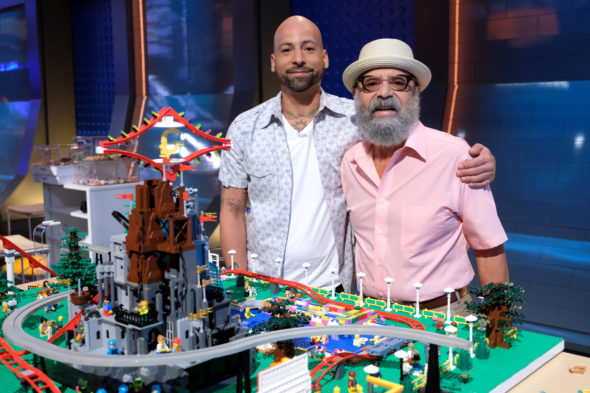 Can this series build a big audience?  Has the LEGO Masters TV show been cancelled or renewed for a second season on FOX? The television vulture is watching all the latest cancellation and renewal news, so this page is the place to track the status of LEGO Masters, season two. Bookmark it, or subscribe for the latest updates. Remember, the television vulture is watching your shows. Are you?

Airing on the FOX television network, the LEGO Masters TV show pits teams of LEGO enthusiasts against other teams in challenges of imagination, design, and creativity. Will Arnett hosts while Jamie Berard, Amy Corbett, and guest celebrities serve as judges. Armed with infinite possibilities and an unlimited supply of LEGO bricks, teams of two compete against each other in ambitious brick-building challenges. In each episode, Arnett, along with expert judges and special guests, encourage the builders, introduce various challenges, and put the builders’ creations to the test. The competing pairs who impress the judges the most progress to the next round while other teams are eliminated. In the finale, the top teams face off for a cash prize, the ultimate LEGO trophy, and the grand title of LEGO Masters.

The first season of LEGO Masters averaged a 1.13 rating in the 18-49 demographic and 3.50 million viewers. Find out how LEGO Masters stacks up against other FOX TV shows.

Will FOX cancel or renew LEGO Masters for season two? The series has good ratings (thanks in part to it following The Masked Singer) and is inexpensive to produce so, I think it will be renewed. I’ll update this page with breaking developments. Subscribe for free alerts on LEGO Masters cancellation or renewal news.

11/12/20 update: LEGO Masters has been renewed for a second season.

What do you think? Are you glad that the LEGO Masters TV show has been renewed for a second season? How would you feel if FOX had cancelled this TV series, instead?

Do you make a book on the dog

One of the few shows for the whole family. My son loves legos and this is a fantastic show that can teach kids to be creative.

I absolutely loved Lego Masters first season. Please renew for a second. It is such a great show and I can watch it with my son. Thank you so much.

Please bring this show back – our whole family watched it together :). We loved this show ❤️

Please renew it ya’ll. Me and my mother watch this show and we absolutely adore the **** out of it. Increase budget, drop Lego jewels in season 2. Literally.

Please do another season! My husband and I both enjoy the show!

Please bring it back I love this show!

Please bring back Lego Masters. It is the best reality show ever!!!!!

Lego Masters was our family show. We couldn’t wait each week until Wednesday to see a new episode. I cried when teams were eliminated just like the Irish judge! Please bring it back for a second season!!

I spent time watching with others who may have not watched on their own. They were hooked and ended up watching every episode though the finale! Please bring back!

Please, please, renew Lego Masters! We need more TV shows like this one.

And the answer is no by almost 100 stuff. Guess it not good enough to get move up the list.

Oh Lego master just said you don’t get this kinda excitement on the masked singer. Calling them to put there money were there mouth is. Next episode we will see who has the better lego master guess star or the person unmasked on the mask Singer whoever in more stuff win. Likely IMDB keep track of the numbers of stuff for me. Let see if Lego master win lose or draw. My money on lose but I see if it win and move up a spot on show to catch up on first.