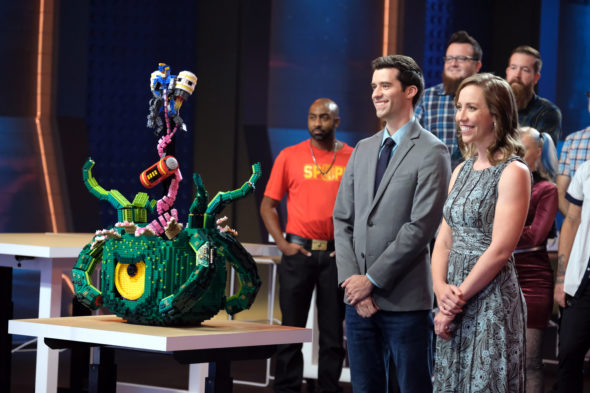 It can be difficult to launch a new TV series and most television programs are cancelled after one season. Last year, FOX struck ratings gold with The Masked Singer. Now, the network has paired it with the new LEGO Masters series in hopes that Masked Singer’s large audience will watch both. Will the strategy work? Will LEGO Masters be cancelled or renewed for season two? Stay tuned. *Status Update Below.

A FOX reality-competition series, the LEGO Masters TV show pits teams of LEGO enthusiasts against other teams in challenges of imagination, design, and creativity. Will Arnett hosts while Jamie Berard, Amy Corbett, and guest celebrities serve as judges. Armed with infinite possibilities and an unlimited supply of LEGO bricks, teams of two compete against each other in ambitious brick-building challenges. In each episode, Arnett, along with expert judges and special guests, encourage the builders, introduce various challenges, and put the builders’ creations to the test. The competing pairs who impress the judges the most progress to the next round while other teams are eliminated. In the finale, the top teams face off for a cash prize, the ultimate LEGO trophy, and the grand title of LEGO Masters.

4/16 update: You can see the latest night’s ratings in context.

What do you think? Do you like the LEGO Masters TV series on FOX? Should it be cancelled or renewed for a second season?

Our household is really enjoying this program! Go Lego

Please put us out of our misery and cancel the show before any more lego blocks are damaged.