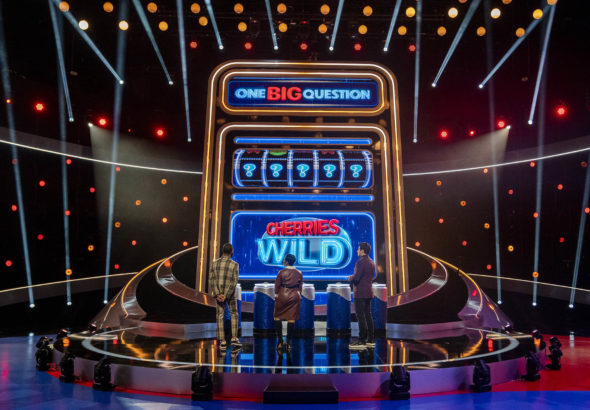 Is this game show a winner or a lemon? Has the Cherries Wild TV show been cancelled or renewed for a second season on FOX? The television vulture is watching all the latest cancellation and renewal news, so this page is the place to track the status of Cherries Wild, season two. Bookmark it, or subscribe for the latest updates. Remember, the television vulture is watching your shows. Are you?

Airing on the FOX television network, the Cherries Wild game show is hosted by Jason Biggs. The competition series features two rounds of pop culture trivia gameplay. In each episode, a team of two contestants try and “Solve the Slots” in hopes of getting one step closer to winning the jackpot. At the end of each episode, when they spin the reels on the enormous, three-story slot machine, contestants will attempt to capture all five Wild Cherries to win the ultimate cash prize — $250,000.

The first season of Cherries Wild averaged a 0.29 rating in the 18-49 demographic and 1.20 million viewers. Find out how Cherries Wild stacks up against other FOX TV shows.

Will FOX cancel or renew Cherries Wild for season two? The network typically fills its Sunday timeslots with animated comedies so airing a game show is a bit of a departure. The series could have used a football lead-in to get a lot of exposure but FOX decided to launch it after the season had already finished. I don’t expect high ratings. However, because this show is part of a collaboration with Pepsi, I think it has a good chance of being renewed.  I’ll update this page with breaking developments. Subscribe for free alerts on Cherries Wild cancellation or renewal news.

What do you think? Do you hope that the Cherries Wild TV show will be renewed for a second season? How would you feel if FOX cancelled this TV series, instead?