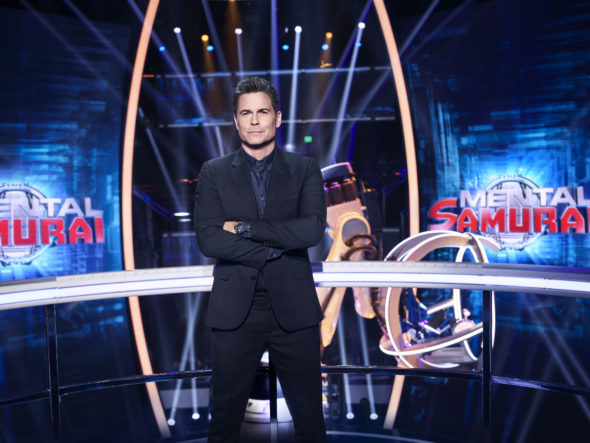 Who wants to go for a wild ride? Has the Mental Samurai TV show been cancelled or renewed for a third season on FOX? The television vulture is watching all the latest cancellation and renewal news, so this page is the place to track the status of Mental Samurai, season three. Bookmark it, or subscribe for the latest updates. Remember, the television vulture is watching your shows. Are you?

Airing on the FOX television network, Mental Samurai is billed as a competition series that pushes every aspect of human intelligence and mental agility. The series is hosted by Rob Lowe, who also serves as a producer. Contestants mentally battle each other — and a ticking clock — as they attempt to stay focused and answer a wide variety of fun and interactive questions of knowledge, memory, puzzles and sequencing. They must do this while being whipped around the arena strapped into “Ava,” a high-speed capsule and robotic arm capable of twisting and turning a full 360 degrees. This is the first-ever obstacle course — for the mind.

The second season of Mental Samurai averages a 0.31 rating in the 18-49 demographic and 1.20 million viewers in the live+same day ratings (includes all DVR playback through 3:00 AM). Compared to season one, that’s down by 42% in the demo and down by 32% in viewership. Find out how Mental Samurai stacks up against other FOX TV shows.

Will FOX cancel or renew Mental Samurai for season three? The show had pretty low ratings in its first year and they aren’t any better in season two. That being said, Lowe stars in one of the network’s highest-rated scripted shows (9-1-1: Lone Star) and I doubt this series is very expensive to produce. I’m leaning toward a renewal but wouldn’t be surprised by a cancellation either. I’ll update this page with breaking developments. Subscribe for free alerts on Mental Samurai cancellation or renewal news.

What do you think? Do you hope that the Mental Samurai TV show will be renewed for a third season? How would you feel if FOX cancelled this TV series, instead?

I hope they don’t ditch it completely, but they definitely could do a lot more to improve the show. For starters, ask better questions or get better challenges. It should NOT take 4-5 minutes to answer these extremely basic and simplistic questions or complete challenges. The countdown should be stopped while the chair is spinning, it is unnecessary to the game itself, and doesn’t accurately measure time fairly. One spin direction may have taken a second longer (shorter) than the previous champion; adding an unfair disadvantage to the time. Next is the camera angles, lol i’m trying to look at… Read more »

This is an awesome show, my husband and i both love it. We are anxious for it’s return. Fox would be stupid to ditch it .

Hope it will be renewed

Yes, I definitely would love for Mental Samurai to come back on.

I definitely Would like to see a season 3. It is a very interesting show to watch.

My husband and I absolutely love mental samurai! We answer as many questions as we can and record it so we can be sure to see every episode. We would be brokenhearted if was not a season 3. Please, please bring it back!

I been watching mental samurai since the beginning, I would be upset if they got rid of the show, I really hope this show comes back for season three , I wish there was a way that I could win some big bucks from home, because I don’t do good under time pressure, I think they should do something different with next season, they should put in studio contestants and people at home against each other and see who’s the next Mental Samurai!!!

Love Mental Samurai !!!! Best game show I’ve seen in years. I hope it gets a third season. Rob Lowe is so great, I’m from his generation and grew up with his movies. The show itself is so fun and extraordinarily interesting. It has so many categories for people of my generation and younger generations to have a good chance at playing along and winning. It allows people to realize their strengths and weaknesses . What a great genuinely fun show! Rob Lowe is a great host and so gracious to all the contestants (and hilariously honest when he doesn’t… Read more »