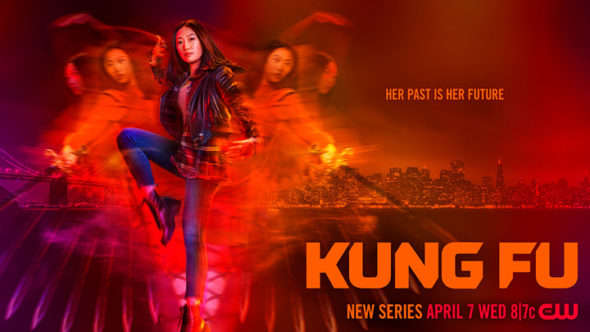 The original Kung Fu TV series debuted in 1972 and ran for three seasons. Two decades later, it was followed by Kung Fu: The Legend Continues, and that show ran for four years. Now, The CW has introduced a new incarnation. Will this version outlast the others Will the new Kung Fu be cancelled or renewed for season two? Stay tuned.  *Status Update Below.

This martial-arts action-adventure TV show, the new version of Kung Fu stars Olivia Liang, Tzi Ma, Kheng Hua Tan, Jon Prasida, Shannon Dang, Eddie Liu, Gavin Stenhouse, Yvonne Chapman, and Tony Chung. Set in the present day, the series revolves around Nicky Shen (Liang), a young Chinese American woman who questions her life’s trajectory and drops out of college to go on a life-changing journey to an isolated monastery in China. When Nicky returns to San Francisco, she finds that her hometown is overrun with crime and corruption and her own parents Jin (Ma) and Mei-Li (Tan) are at the mercy of a powerful Triad. Nicky depends on her martial arts skills and Shaolin values to protect her community and bring criminals to justice. She also searches for Zhilan (Chapman), the ruthless assassin who killed Nicky’s Shaolin mentor Pei-Ling (Kai) and is now targeting Nicky herself.

7/22 update: You can see the latest night’s ratings in context.

What do you think? Do you like the Kung Fu TV series on The CW? Should it be cancelled or renewed for a second season?

Really enjoyed the first season. Hope they keep it going for multiple seasons more, so long as the writing is good.

Yes please renew, this show is great and so many ways. It shows compassion empathy excitement it’s a family love. And the actors actresses are great. Love watching the show

I love the show, the weaving of family stories, diverse Asian cast, and the suspense. Nicky and Henry need outlets to keep themselves and each other sharp so they don’t get their butts kicked. The Zhilan segments are pretty exhilarating! It’s a good “escape” show.

I love the show. I watched it with my grand daughters (ages 8 and 6) and they were equally excited about it. We can’t wait for season 2!!!

I totally enjoy this new re-boot of Kung Fu. I think this is a good series for the younger generation to watch.

I am a fan of the original so decided to watch. I absolutely love this new version. I can really relate to Tza Ma’s character. I think he is an excellent actor. Zhilan is creepy and makes a good adversary. Of course the one thing is missing is David Carradine.

I’m always weary when they reboot a show and make it almost nothing like the original. It usually means that the show could never stand on it’s own without stealing brand recognition. I like martial arts stuff most of the time but I think I’ll skip this for now.

I do not watch the news cause of all the crazy going on in the world, and watching tv for me to escape. Now they are putting that crazy that I do not want to see in news show on entertainment. After this last show Ep. 6, it will be my last.

Totally agree. Just deleted it from my list of scheduled shows.

This show is sooo boring, she gets her ass kicked every time, for a shaolin who is suppose to be good she alway looses. Not vey well done

Not Kung Fu w/o Carradine
AKA grasshopper

Missed the second one, could we get an encore Pleaseeees.

It was okay for a pilot but had its extremely cheesy moments. Fans of the original series I feel will be extremely disappointed though, it is absolutely NOTHING like the original Kung Fu, they could just as well have named it.. Crouching Tiger, Hidden Dragon, and I think that would have been a better series to have followed in name for this series instead of calling it Kung Fu.

That’s today’s biggest problem in the industry. They just want to erase everything they think is old and dated, to fit their ideologies. Regardless of the original product, in a very insulting and condescending way. That’s why I stopped watching all their « reboots » that are mostly resets to push more of the same agendas and commonplaces.

I feel most of the shows on CW is for the younger generation, it doesn’t make sense to have this series follow in the same concept or storyline as the original Kung Fu. The younger viewers would not enjoy the old Kung Fu (or I could be wrong). Take a look at Riverdale though, it is nothing like the Archie comics but yet, it is very popular with the younger viewers? Ultimately, the world will evolve.