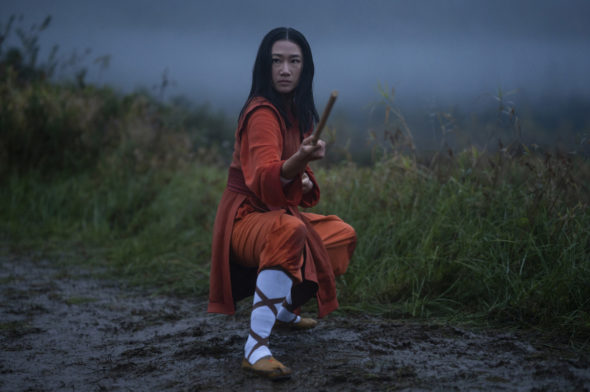 TV show description:
This martial arts action-adventure TV series is a modern-day adaptation of the original version of Kung Fu and the later Kung Fu: The Legend Continues shows.

Set in the present day, the story revolves around Nicky Shen (Liang), a young Chinese American woman who questions her life’s trajectory and drops out of college to go on a life-changing journey to an isolated monastery in China.

When Nicky returns to San Francisco, she finds that her hometown is overrun with crime and corruption and her own parents Jin (Ma) and Mei-Li (Tan) are at the mercy of a powerful Triad.

Nicky depends on her martial arts skills and Shaolin values to protect her community and bring criminals to justice. She also searches for Zhilan (Chapman), the ruthless assassin who killed Nicky’s Shaolin mentor Pei-Ling (Kai) and is now targeting Nicky herself.

What do you think? Do you like the Kung Fu TV show? Do you think it should be cancelled or renewed for another season?

Love the show, continue it!

Great series. Just wondered what happened to rest of season.

Kung-fu 2021 should be renewed.
They should cancel some of the reality shows & so called adult cartoons. They cancel the good shows & keep trash shows. That is why mote people are changing to live streaming.

I like the show at first and the story and most of the characters but the show is staring to turn me off . All of the male Asian characters are made to look really stupid and the Nikki needs to lean on her white ex boy friend who is made to look perfect to mush that is insulting example in episode 1 Ryan goes to a ship yard to take pictures of the bad guys holding a giant camera i guess the writers for got cell phones have cameras. Henry just met Nikki and he tell her she has… Read more »

Please FIND IT IN YOUR HEARTS & TO KERP KUNG FU TV SERIES ON CW NETWORK GOING IT WOULD BE YEG ANOTHER TRAGIC DECISION TO CANCEL THIS SERIES! ITS FINALLY SHOWING TRUTHS ABOUT THE SAN FRANCISCO CHINATOWN HISTORY TO PRESENT STATE I GREW UP IN THE CITY AND CHINATOWN FROM THE 1960:S 70’S AND 80’S I KNOW WHATS REALLY GOING ON THWRE! ITS ABOUT DAMNED TIME TV HAS AT VERY LEAST SEMI TRUTHS ABOUT CHINATOWN AND THE BEAUTIFUL CHINESE PEOPLE WHO LIVE AND WORK THERE!

Really good show was wondering where new episodes are, hasn’t been on for a few weeks

This is one of my favorite shows I love the story and have looked forward to every new episode. It is great to see a tv show based around Chinese culture we really needed something different to shake things up in our television viewing and this show did the trick.

The show started off well but now it’s becoming political. Politics should never be part of the show unless it’s important for the story line. The premise of the show was to find a killer no Politics needed.

Politics/government is part of all of our lives, we cannot escape it. If you watch the news everyday you get more than a barrel full of it 24 hrs. a day…unfortunately with real stress too often.

Nothing reminds me of the original and if you are going to make a series about Kung Fu, make sure that the actors are convincing in the action scenes as this fell short so wasn’t believable. I don’t feel inclined to watch anymore

i am glad that it is not like the original
. it doesn’t have the slow motion and the choreography is alot better. the show that i don’t watch is walker now that is nothing like the original

I have no intentions of watching it

Kung Fu in name only. It bares no resemblance to the original series whatsoever. Bait & Switch for the struggling network.

It doesn’t have to be like the original Kung Fu series from 40 years ago. I watched that one from its beginning to end. Tis new version is very good! The mystery, suspense, human interactions, and with female lead/heroine. This program needs to be renewed na promoted more. The CW is (to me) just coming into its own and I love it. AND is really great to have Asian actors as the protagonists.