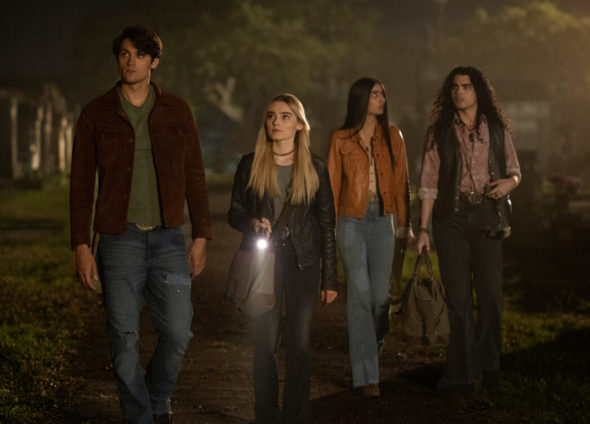 TV show description:
A fantasy-horror drama series, The Winchesters TV show was developed by Robbie Thompson and is a prequel to the long-running Supernatural series.

Told from the perspective of narrator Dean Winchester (Ackles), the series tells the untold love story of how his parents, John Winchester (Rodger) and Mary Campbell (Donnelly), put it all on the line not only to save their love but the entire world.

When John returns home from fighting in Vietnam, a mysterious encounter sparks a new mission to trace his father’s past. In his journey, John crosses paths with a 19-year-old demon hunter named Mary. She’s searching for answers after the disappearance of her own father.

Together, the two join forces with young hunter-in-training Latika (Khurshid) and easygoing hunter Carlos (Fleites) to uncover the hidden truths about both their families. Their investigation leads them to a rare book emporium, whose owner, Ada (McKinney), has an interest in the occult and could provide the missing pieces to their puzzle.

However, secrets run deep for both the Winchesters and Campbells. Despite the best efforts of John’s mother, Millie (Kajlich), to protect her son from pursuing a dangerous life of demon hunting, John and Mary are both determined to work together to uphold their families’ legacies while beginning to form a family of their own.

What do you think? Do you like The Winchesters TV show? Do you think it should be cancelled or renewed for another season?