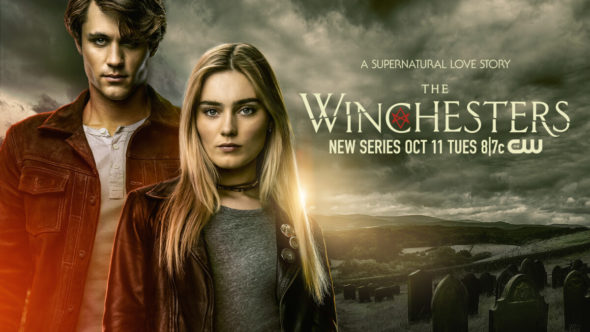 The Supernatural TV series had a very successful run and lasted for 15 seasons between The WB and The CW. How will this new prequel series fare? Will it also be a hit, or will viewers leave it in the dust since the action doesn’t focus on Sam and Dean? Will The Winchesters be cancelled or renewed for season two? Stay tuned.

A fantasy-horror drama series, The Winchesters TV show stars Meg Donnelly, Drake Rodger, Jonathan ”JoJo” Fleites, Nida Khurshid, Demetria McKinney, Bianca Kajlich, and Jensen Ackles (narration). Told from the perspective of narrator Dean Winchester (Ackles), the series tells the untold love story of how his parents, veteran John Winchester (Rodger) and demon hunter Mary Campbell (Donnelly), put it all on the line not only to save their love but the entire world. The two cross paths as they’re each searching for information about their fathers. They join forces with young hunter-in-training Latika (Khurshid) and easygoing hunter Carlos (Fleites) to uncover the hidden truths about both their families. Their investigation leads them to a rare book emporium, whose owner, Ada (McKinney), has an interest in the occult and could provide the missing pieces to their puzzle.

11/23 update: You can see the latest night’s ratings in context.

What do you think? Do you like The Winchesters TV series on The CW? Should it be cancelled or renewed for a second season?

I wanted to like this show but sadly it’s trying too hard. The characters don’t ring true. Hopefully they can straighten it out. If not it will be similar to the Rings of Power

My first reaction to the pilot was infinite sadness. After watching Sam and Dean for fifteen wonderful seasons, I expected that one of the leads, who has put his name to this ‘prequel’, would’ve had more understanding of what made Supernatural so awesome. The story of Mary and John could have been a very interesting one to explore even if it had been extensively referenced in the OG show, but it should have stuck to canon…..the two disliking each other and eventually falling in love because of a cupid’s arrow. We could have followed their story as they dated, got… Read more »

I watched the first episode, so far I enjoyed it. I would like to see more of the show. The show is funny and interesting. Keep up the good work.