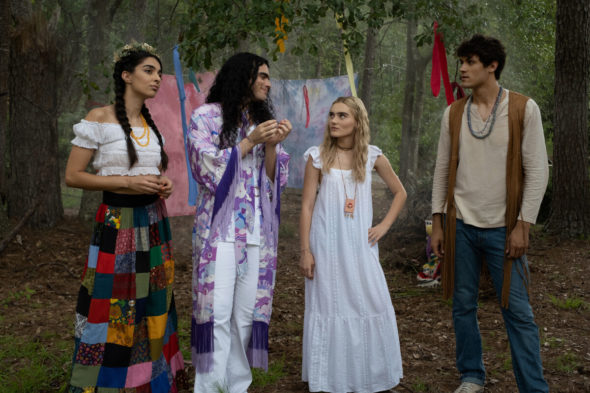 A CW fantasy-horror drama series, The Winchesters TV show is a prequel to the Supernatural series. It stars Meg Donnelly, Drake Rodger, Jonathan ”JoJo” Fleites, Nida Khurshid, Demetria McKinney, Bianca Kajlich, and Jensen Ackles (narration). Told from the perspective of narrator Dean Winchester (Ackles), the series tells the untold love story of how his parents, veteran John Winchester (Rodger) and demon hunter Mary Campbell (Donnelly), put it all on the line not only to save their love but the entire world. The two cross paths as they’re each searching for information about their fathers. They join forces with young hunter-in-training Latika (Khurshid) and easygoing hunter Carlos (Fleites) to uncover the hidden truths about both their families. Their investigation leads them to a rare book emporium, whose owner, Ada (McKinney), has an interest in the occult and could provide the missing pieces to their puzzle.

I LOVE THE SHOW! KEEP IT GOING! DEAN IS THE NARRATOR & IT’S JUST GETTING IT’S LEGS! GIVE IT A CHANCE! I THINK THE ACTING IS GOOD!

Supernatural was a great show. The creators made a terrific universe. It would be a shame to lose it. There are infinite stories to tell in it and the Winchesters are just one. It needs to keep going. It will find itself and fans will latch on. I would encourage the creators of the Winchesters to look at ep 1 of the original series… it was horror based. The series always had an air if threat. They need to bring that aspect back.

Strong start to introduce an extended Supernatural world. It’s a new vision, a new show, treat it as such keep an open mind, judge for yourself.