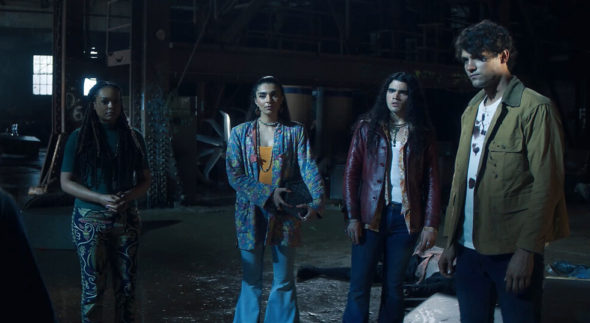 Like Supernatural, this prequel has plenty of darkness and demon hunting. Has The Winchesters TV show been cancelled or renewed for a second season on The CW? The television vulture is watching all the latest cancellation and renewal news, so this page is the place to track the status of The Winchesters, season two. Bookmark it, or subscribe for the latest updates. Remember, the television vulture is watching your shows. Are you?

A fantasy-horror series airing on The CW television network, The Winchesters TV show is a prequel to the Supernatural series. It stars Meg Donnelly, Drake Rodger, Jonathan ”JoJo” Fleites, Nida Khurshid, Demetria McKinney, Bianca Kajlich, and Jensen Ackles (narration). Told from the perspective of narrator Dean Winchester (Ackles), the series tells the untold love story of how his parents, veteran John Winchester (Rodger) and demon hunter Mary Campbell (Donnelly), put it all on the line not only to save their love but the entire world. The two cross paths as they’re each searching for information about their fathers. They join forces with young hunter-in-training Latika (Khurshid) and easygoing hunter Carlos (Fleites) to uncover the hidden truths about both their families. Their investigation leads them to a rare book emporium, whose owner, Ada (McKinney), has an interest in the occult and could provide the missing pieces to their puzzle.

The first season of The Winchesters averages a 0.10 rating in the 18-49 demographic and 554,000 viewers in the live+same day ratings (including DVR playback through 3:00 AM). While these numbers don’t include further delayed or streaming viewing, they are a very good indicator of how a show is performing, especially when compared to others on the same channel. There can be other economic factors involved in a show’s fate, but typically the higher-rated series are renewed and the lower-rated ones are cancelled. Find out how The Winchesters stacks up against other The CW TV shows.

Will The CW cancel or renew The Winchesters for season two? The Supernatural series was very successful for the network, so we know that there’s a built-in audience for this new series who will likely at least sample it. Nexstar now runs the network and wants to make it profitable by 2025. The new management wants to do that by mostly focusing on inexpensive and acquired programming. Though The Winchesters doesn’t fall under either category, I think this prequel will be renewed on The CW or be picked up by a streaming service. I’ll update this page with breaking developments. Subscribe for free alerts on The Winchesters cancellation or renewal news.

What do you think? Do you hope that The Winchesters TV show will be renewed for a second season? How would you feel if The CW cancelled this TV series, instead?