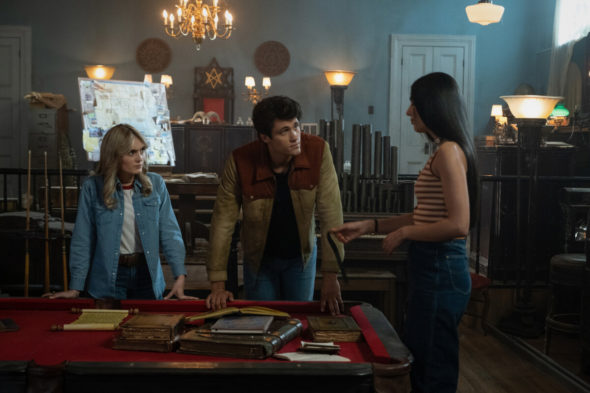 Are the lack of full-season orders a sign that the dramas will be cancelled? It’s unclear what the future of any original CW series will be, given the recent acquisition by Nexstar Media Group.  Deadline revealed that network head Dennis Miller has stressed to producers and the series’ stars that no decisions about next season have been made.

Still, four CW scripted series are ending this season — The Flash, Riverdale, Nancy Drew, and DC’s Stargirl — and the list is expected to grow throughout the 2022-23 season. Word is that The CW’s new management wants to pay a $1 million license fee per episode for its original scripted series, requiring a restructuring of deals with suppliers CBS Studios and Warner Bros. Television. Episodes typically cost the network about $2 million each.

What do you think? Are you a fan of these two CW series? Do you want to see both shows renewed for second seasons?

Well you are in the entertainment business and Independence or Winchesters series is exactly that. It has good history and a great following and given time it will only grow bigger. A mistake is to cut these too early. Winchester is a definite keeper.

I have to say I love both of these shows so much! So I am hoping and praying that both get to continue. Walker:Independence is awesome, and I watch the other Walker as well. The Winchesters is also so very watchable! I’m thrilled to be excited about watching again. Always have loved CW’s shows.

These two shows and Walker are the only shows I watch on the CW. I hope they get renewed.

They cancelled the last of the shows I watched last season. The only reason I returned this season was for The Winchesters and Leonardo, both of which I would love to continue watching. So many great shows ended too soon.

Please do not cancel Walker:Independence. Lovewestern. And keep modern Walker..

Seriously?? You have cancelled almost all of the CW shows. Most of my favorites WERE on the CW. Now, The Winchesters and Walker, Independence?? Those two are great shows! Could the CW be signing their death warrant? Quite possibly.