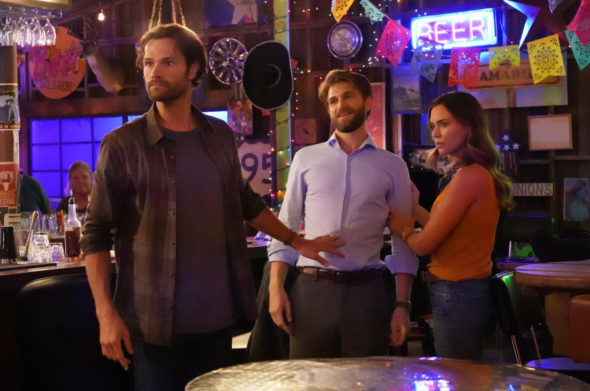 How long will Cordell stay on the case? Has the Walker TV show been cancelled or renewed for a third season on The CW? The television vulture is watching all the latest cancellation and renewal news, so this page is the place to track the status of Walker, season three. Bookmark it, or subscribe for the latest updates. Remember, the television vulture is watching your shows. Are you?

Airing on The CW television network, the Walker TV show stars Jared Padalecki, Lindsey Morgan, Molly Hagan, Keegan Allen, Violet Brinson, Kale Culley, Coby Bell, Jeff Pierre, Mitch Pileggi, and Odette Annable with Dave Annable recurring. It’s a reboot of the long-running Walker, Texas Ranger TV show from the 1990s. The story begins with Texas Ranger Cordell Walker (Padalecki), a widower and father with his own moral code, as he returns home to Austin, Texas after being undercover for nearly a year. He tries to reconnect with his son August (Culley) and daughter Stella (Brinson), as well as his brother Liam (Allen) and parents, Abeline (Hagan) and Bonham (Pileggi). At work, Walker’s former colleague Larry James (Bell) is now his Ranger Captain and Walker has a new partner, Micki Ramirez (Morgan), one of the first women in Texas Rangers’ history.

The second season of Walker averaged a 0.11 rating in the 18-49 demographic and 902,000 viewers in the live+same day ratings (includes all DVR playback through 3:00 AM). Compared to season one, that’s down by 47% in the demo and down by 32% in viewership in the live+same day ratings (including DVR playback through 3:00 AM). While these numbers don’t include further delayed or streaming viewing, they are a very good indicator of how a show is performing, especially when compared to others on the same channel. Though other economic factors are involved, the higher-rated shows usually get renewed and the lower-rated ones get cancelled. Find out how Walker stacks up against other CW TV shows.

Will The CW cancel or renew Walker for season three? The series had a very strong premiere in the ratings but they dwindled as the first season progressed. While the traditional numbers aren’t as strong as they could be, I have no doubt that Walker will be renewed. I’ll update this page with breaking developments. Subscribe for free alerts on Walker cancellation or renewal news.

What do you think? Are you glad that the Walker TV show has been renewed for a third season? How would you feel if The CW had cancelled this TV series, instead?

I don’t mind Walker but can you Please,Please Please STOP having him stutter constantly! Makes him appear as a total idiot. That broken speech all the time is annoying. Once in awhile ok but o every scene

Seems like thats how he really is in real life.. he was that way in Supernatural‍♂️

I love the new Walker tv show… I hope they don’t cancel it.