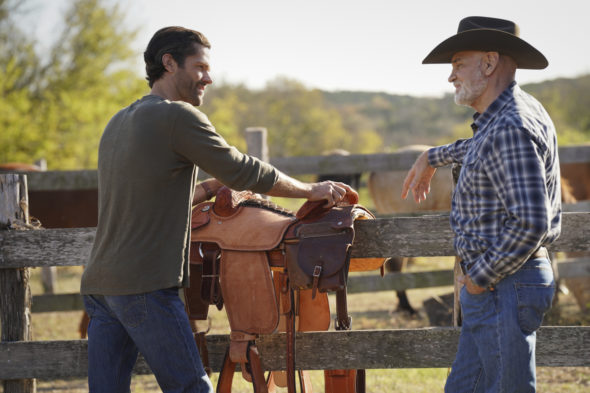 Can Cordell find answers in the first season of the Walker TV show on The CW? As we all know, the Nielsen ratings typically play a big role in determining whether a TV show like Walker is cancelled or renewed for season two. Unfortunately, most of us do not live in Nielsen households. Because many viewers feel frustrated when their viewing habits and opinions aren’t considered, we invite you to rate all of the first season episodes of Walker here.  *Status Update Below.

A CW action series, Walker stars Jared Padalecki, Lindsey Morgan, Keegan Allen, Mitch Pileggi, Molly Hagan, Violet Brinson, Kale Culley, Coby Bell, and Jeff Pierre. It’s a reboot of the longrunning Walker, Texas Ranger TV show from the 1990s. In the current story, Texas Ranger Cordell Walker (Padalecki) is a widower and father with his own moral code. He returns home to Austin, Texas after being undercover for nearly a year and discovers there’s harder work to be done at home. He tries to reconnect with his son (Culley) and daughter (Brinson), as well as his brother (Allen), mother (Hagan), and father (Pileggi). At work, Walker’s former colleague is now his Ranger Captain (Bell) and he has a new partner (Morgan), one of the first women in Texas Rangers’ history. Walker tries to balance all the new details in his old life while growing increasingly suspicious about the circumstances surrounding the death of his wife (Genevieve Padalecki).

What do you think? Which season one episodes of the Walker TV series do you rate as wonderful, terrible, or somewhere between? Do you think that Walker should be cancelled or renewed for a second season on The CW? Don’t forget to vote, and share your thoughts, below.

*2/3/21 update: Walker has been renewed for a second season on The CW.

I LOVE this show! I love the dynamics presented with having a law enforcement father and the effects that profession has on an entire family. Too often we forget what a family of law officers sacrifice. This show gives us that with just enough action on the side. Hopefully the show will continue on so we can see more of how the characters flesh out.

It was a let down. Not much action the lead being lead by a junior officer and just not great. I really wanted to love it, and have given it a couple trys. I will try again next season…if it lasts.

It lacks action and the characters don’t sync. His smile seems off. Unless it picks up by the next episode I will not watch it anymore. Right now I would cancel it.

Forget Walker Texas Ranger this was the old show.
The knew show Walker ( his younger years ) based on his family
that trying to live who the tragedy. Give it the Chance.

Really am liking Walker more as the season advance

LOSE OR CANCEL THIS SHOW!

This guy is NO Chuck Norris!

I watched the first episode and that was the last one.

What a CRAPPY Show!

If this show didn’t have Jared Padalecki, I doubt anyone would watch it at all beyond the first episode. I’m pretty sure anyone who still watches and says they enjoy it is just a fan of his and or the sidekick chick. It’s probably best watched while listening to music during house cleaning, otherwise you fall asleep or just don’t care.

I wanted to like it, but it has bad acting, a bad script and bad camerawork. The plots are non existent and unbelievable. It’s just a lazy way to show Jared Padalecki riding a horse, on a bull or looking angsty. It really is totally aimed at his stans. If it didn’t have him it wouldn’t have ever been greenlit. It’s a shame because he’s a good actor and charismatic so I wish he hadn’t settled for this. His wife is also way too plastic to be in the flashbacks. Honestly, you wouldn’t put her near a naked flame, great… Read more »

As usual the directors in Hollywood do not understand that the loud DISTRACTING background music makes it difficult to hear what the actors are saying. Guess it goes to prove again that Hollywood film makers are full of dumbness with little or no common sense.

This is an insult to the original. No martial arts, he is a drunk, not in charge, rule breaking bum!

Worthless Show. Time to Cancel it!

Fox Took off Deputy last year and it was a superior show to this JOKE of a Show!

What a total snooze. He not only shows what a horrible father looks like he’s not even a good actor. Took it off my list of things to watch. Didn’t remotely resemble the original.

The only connection between this and “Walker, Texas Ranger” is the name of the titular character. It’s 95% family and interpersonal drama. Instead of being a top notch crime fighter, Walker himself is a “mess” (contradicting his supposed legendary stature). It’s not a reboot at all; it’s a bait and switch. So far, the only reason I can see why someone would want to watch this is if they’re avid Jared Padalecki fans. I like him okay, but not enough to stick with this unless it changes dramatically for the better.

Ridiculous show. Too concerned with all the PC nonsense instead of focusing on an in depth storyline. Will not watch again.