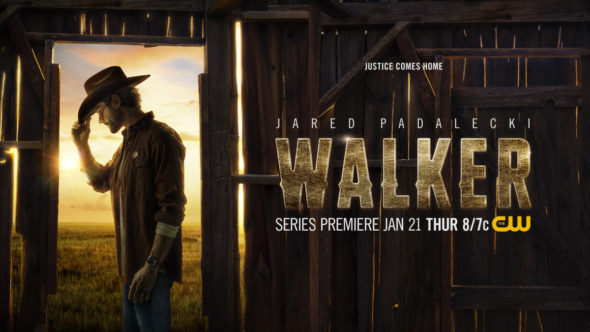 Supernatural ran for an astounding 15 seasons and now, series star Jared Padalecki has returned to The CW in a very different series, Walker. Will this new show also be a success for the network? Will Walker be cancelled or renewed for season two? Stay tuned. *Status Update Below.

An action series, Walker stars Jared Padalecki, Lindsey Morgan, Keegan Allen, Mitch Pileggi, Molly Hagan, Violet Brinson, Kale Culley, Coby Bell, and Jeff Pierre. It’s a reboot of the long-running Walker, Texas Ranger TV show from the 1990s. In the current story, Texas Ranger Cordell Walker (Padalecki) is a widower and father with his own moral code. He returns home to Austin, Texas after being undercover for nearly a year and discovers there’s harder work to be done at home. He tries to reconnect with his son (Culley) and daughter (Brinson), as well as his brother (Allen), mother (Hagan), and father (Pileggi). At work, Walker’s former colleague is now his Ranger Captain (Bell) and he has a new partner (Morgan), one of the first women in Texas Rangers’ history. Walker tries to balance all the new details in his old life while growing increasingly suspicious about the circumstances surrounding the death of his wife (Genevieve Padalecki).

8/13 update: You can see the latest night’s ratings in context.

What do you think? Do you like the Walker TV series on The CW? Should it be cancelled or renewed for a second season?

*2/3/21 update: Walker has been renewed for a second season on The CW.

I love the show, Jared Padalecki is doing a great job as Walker. Fantastic cast. I look forward to watching season two soon.

A great show! Jared Padalecki is amazing and the whole cast whole cast are excellent actors. I liked it right away. Thank god he’s nothing like old Walker with Chuck Norris, which I never liked (let’s face it, Norris act like a log!) And who would be completely anachronistic today. The storyline is interesting and I can’t wait to see next season. I’m glad it’s the CW’s most watched show. Good job!

Then I suppose you have the same thing to say about Superman and Lois since they experienced the exact same demo drop? It seems to be across the board for the network as a whole. It’s not specific to this one show in fact Walker is still the highest viewed show on the whole network. So I don’t think they’re worried about this show.

Disappointed, really don’t care for Jared ,he’s self absorbed, arrogant just looking for something new to watch, and it won’t be Walker, Chuck Norris he is NOT!!!!

It’s embarrassing how far and fast the ratings are dropping. I’m beginning to think actually worry about J’s mental health with how he live tweets just to get the falling numbers the show has. This show deserves a mercy cancellation.

Carla Arana
Reply to  Not me

Ikr ratings dropped faster than ice cream left in 100 degree heat, don’t know how it got a season 2

he didn’t do or say anything awful, and the show is just boring, which is the fault of producers and writers.

Well, PLEASE do some research! Harassing people on social media with names, face photos and location. Arrested for assault and public intoxication (he beat up 2 of his employees), trying to bribe the cops, making fun of the death of a beloved actor, pulling “pranks” where several people were put in high physical danger (including newborns), making rape jokes on stage, hitting the emergengy break on a full train because of a forgotten bag, openly misgendering people, reading about childrent who got ripped away from their parents and were forced into cages at international borders – and deciding to produce… Read more »

I eagerly anticipated this show for over a year, but “Walker” is just awful. Too political, too dysfunctional, too teen-based, and trying way to hard to dispel every stereotype ever invented. I get it what they’re going for, but why in the world did they call it a “Walker” reboot? Did they expect today’s teens to be drawn to an old TV show? Or were they just hoping to alienate the original fanbase?

Liking this new show so far, much better than the old one.

Really like this series! Took half an hour to search and to find out if it would continue. I look forward to the next episodes!