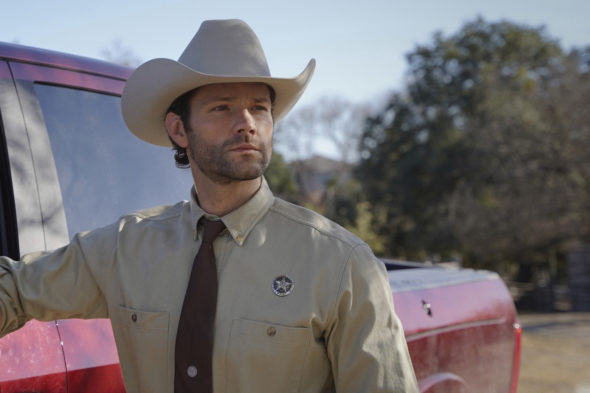 TV show description:
An action series, Walker is a reboot of the Walker, Texas Ranger TV show which ran for 200 episodes over eight seasons on CBS (in addition to a TV movie).

In the story, Texas Ranger Cordell Walker (Padalecki) is a widower and father with his own moral code. He returns home to Austin, Texas after being undercover for nearly a year and discovers there’s harder work to be done at home.

Walker attempts to reconnect with his creative and thoughtful son, August (Culley), and his headstrong, somewhat rebellious teenaged daughter, Stella (Brinson), and navigate changes with the rest of the family.

His ADA brother, William “Liam” Walker (Allen), returned home from New York and stepped in during Walker’s absence. This makes it all the more difficult for Walker to resume his place in the family. Abeline (Hagan), the perceptive matriarch of the Walker clan, doesn’t hesitate to speak her mind to keep everyone in line. The sons’ traditional rancher father, Bonham (Pileggi), isn’t much for long-winded, sentimental prattling, but he voices his opinion when it counts most.

At work, Walker’s former colleague, Larry James (Bell), is now his Ranger Captain and both men need time to adjust to their new dynamic. Walker finds unexpected common ground with his new partner, Micki Ramirez (Morgan). She knows there’s a lot at stake as one of the first women in Texas Rangers’ history and is quick to school Walker on curbing his maverick ways.

Walker’s not Micki’s only distraction though, as her relationship with an old friend, Trey (Pierre) becomes more serious.

The series closely follows Walker as he tries to balance all the new details in his old life while growing increasingly suspicious about the circumstances surrounding the death of his wife (Genevieve Padalecki).

What do you think? Do you like the Walker TV show? Do you think it should be cancelled or renewed for another season?

I love the new Walker plus I liked Walker Texas Ranger

I like Walker but it does need to pickup the pace and he needs to show some more gumption and take control. Be the badass we all know and not let the death of his wife run the show. I think he’s a great actor that needs to be utilized and again, please pickup the pace or the show will be cancelled.

This new Walker series is no comparison to the original Walker Texas Ranger. This Walker character is more less a player, although had loved his wife who was later murdered during the series premiere. But this show has no positive plots as far as action for Walker. He’s got two troubled kids, he and his brother on opposite ends of being lawman, he had to move back in with his parents after his wife’s death, along with having his kids with him as well. This show is no revamp whatsoever. It needs to be cancelled.

I vote to FOREVER CANCEL THIS PATHETIC ATTEMPT AT REMAKING CHUCK NORRIS FANTASTIC TV SERIES WALKER TEXAS RANGER. That Jared fella sucks at acting, you can fire him too.

Please cancel this terrible weak show. If you want to make a weak formula show go ahead but be original and brave and give him his own name. This could have been McGregor Texas Ranger or some other name. Its just a huge lack of confidence to call it Walker.

i get the premiere episode of a new show is sometime slow and boring, as it introduces most of the characters and sets up story….as far as that this did not disappoint at all, slow pacing, little action, boring at times…like i said, i get it,..i will watch 2-3 more episodes to see how it develops , BUT, if “walker” continues to be a moronic shell of the iconic character, and the main premise is the woe is me family “story” of this show, i will not continue to watch.

I dont know since I watch it and realize Mickie seem like she is taking over and twlling him what to and it confuse by how walker handle it, if he is the sheriff or whatever and he should tell her what to do but it her telling him what to do. It not the same as the old walker. Which i understand. Maybe it for different from old Walker to new walker. Just saying. I m not saying I m right , just kind of lost watching it. Not sure if this show last.

Enjoyed Walker. Will watch it again…

I found the opening music(?)very jarring. The episode was too slow paced for my liking. I did turn the show off about ten minutes in although I did record it. I watched the show this morning to see if I still felt the same way about it. I didn’t change my .mind,however, I will watch two or three more episodes to see if it gets.my attention.