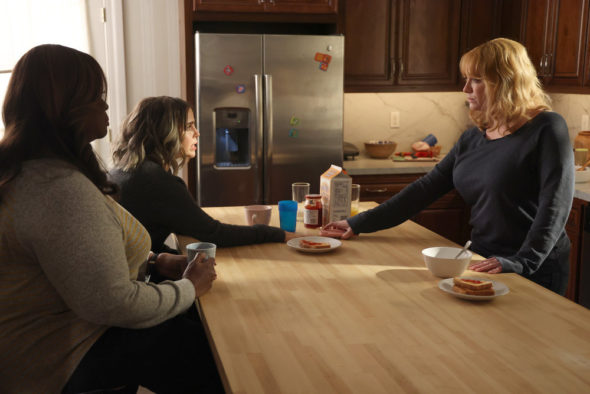 How much higher can the stakes get in the fourth season of the Good Girls TV show on NBC? As we all know, the Nielsen ratings typically play a big role in determining whether a TV show like Good Girls is cancelled or renewed for season five. Unfortunately, most of us do not live in Nielsen households. Because many viewers feel frustration when their viewing habits and opinions aren’t considered, we invite you to rate all of the fourth season episodes of Good Girls here. Status Update Below.

An NBC drama series, the Good Girls TV show stars Christina Hendricks, Retta, Mae Whitman, Reno Wilson, Manny Montana, Lidya Jewett, Isaiah Stannard, and Matthew Lillard. The series centers on three suburban moms who’ve struggled to get by. They hold up the local Fine & Frugal supermarket, but their take far exceeds their expectations and find themselves in deep trouble with the local crime boss. In season four, the stakes get higher as the Secret Service closes in on the women’s counterfeit ring. When we last saw Beth, she was struggling to carve out her own criminal path separate from Rio, using her husband’s spa company, Boland Bubbles, as a front. Ruby seemed to have salvaged her marriage after a rocky road, but only time will tell if her hidden secrets implode. Annie is focusing on inner love and healing as she takes the journey to rebuild independence.

What do you think? Which season four episodes of the Good Girls TV series do you rate as wonderful, terrible, or somewhere between? Do you think that Good Girls should be cancelled or renewed for a fifth season on NBC? Don’t forget to vote, and share your thoughts, below.

Love this show, Please Please Please don’t cancel, I love wondering what the girls will get into next, also love Manny Montoya, love the bad boy(man) image

L OV E L O V E L O V E!! This show is fantastic and completely different which is where the appeal it! It is SO good and the cast are all wonderfully talented and work so great together! It is the perfect mesh of comedy, drama and suspense! Never cancel!!!!

Please don’t cancel Good Girls!! It’s one of the best and most unique shows on tv. The writing style that gets so much of everything in a show, ie, drama, comedy, suspense..It’s a great show please don’t take it off!!!

Great show! I look forward to this show every week!

Great show, it’s different from all the hospital,doctor,nurses,cop,firefighters, and rescue shows. Each episode sucks you in. Awesome plot and story. Hope it gets another season. I look forward every week to watching.

Love this show something both my husband and I can watch together. Not many we both like. Please more

Love this show. Different than any other show on TV. Great characters, fun to watch, looking forward to watching them for a long time

I love to watch the Good Girls. Please don’t cancel them.

I love good girls just had my boyfriend start it and he has already saw episode 1 season 4 please have many more seasons!

Love Good Girls! Hoping for many seasons to come!

I also love this show. All the characters mesh together so well that you want to keep watching them. Hope it lasts for many years!

I loved this show from the beginning. A completely fresh storyline with really well fleshed out characters. Everyone is on point, from the comedic genius between Beth, Ruby and Annie, Ruby and Stan but the dynamic between Beth and Rio is everything. Their chemistry was immediately evident. I could listen to that slow sexy drawl voice of his all day long, I loved the addition of Andrew McCarthy in season three and things seem to be intensifying between his character and Beth in season four. Can’t wait for more.