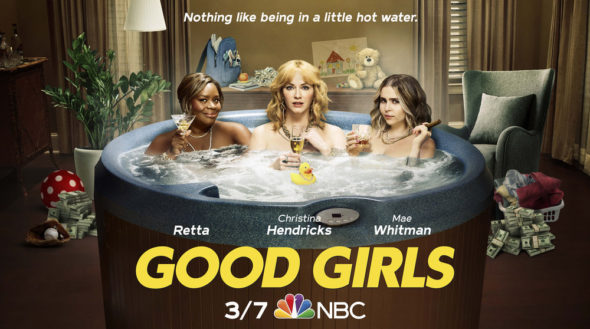 Though the Good Girls series on NBC has a devoted following, it’s never performed very well in the traditional ratings. Will the story of Beth, Ruby, and Annie continue for many years to come or, is the end near? Will Good Girls be cancelled or renewed for season five? Stay tuned. Status Update Below.

Good Girls stars Christina Hendricks, Retta, Mae Whitman, Reno Wilson, Manny Montana, Lidya Jewett, Isaiah Stannard, and Matthew Lillard. The TV series centers on three suburban moms who’ve struggled to get by. They hold up the local Fine & Frugal supermarket, but their take far exceeds their expectations, and they find themselves in deep trouble with the local crime boss. In season four, the stakes get higher as the Secret Service closes in on the women’s counterfeit ring. When we last saw Beth, she was struggling to carve out her own criminal path separate from Rio, using her husband’s spa company, Boland Bubbles, as a front. Ruby seemed to have salvaged her marriage after a rocky road, but only time will tell if her hidden secrets implode. Annie is focusing on inner love and healing as she takes the journey to rebuild independence.

7/23 update: You can see the latest night’s ratings in context.

For comparisons: Season three of Good Girls on NBC averaged a 0.42 rating in the 18-49 demographic and 1.84 million viewers.

What do you think? Do you like the Good Girls TV series on NBC? Should it be cancelled or renewed for a fifth season?

Yessssssssssssssss THE SEASON(S) SHOULD BE ENDLESS. I AM WILLING TO SEND IN SCRIPTS FOR NEW EPISODES IF THAT WILL HELP. OH AM ALSO KNOWN AS GRANDMA COOKIE

I found this series on NETFLIX and I love it. It stopped after the third series and would love to see it continue. I’ve heard that it is suppose to return to TV on a Connecticut channel. When is this going to happen. I am anxious to see it.

I use to love this show ! It definitely has lost it’s luster. The show is a confusing collage of a hot mess. Seems like the writers are pulling ideas out of a random hat. No longer interesting

I have enjoyed Good Girls since the first episode! RenewGoodGirls!!

I have been watching Good Girls since its inception. I love the show. Waited patiently for Season 4 to begin. I am disappointed with the Nielson ratings solely because I AM NOT included in their demographic age group! I am a bit older than 49 and yet I watch the Good Girls. If Nielson is including ALL viewers of the show then at the very least ALL age groups should be represented TRUTHFULLY. I do NOT wish Good Girls to be cancelled and look forward to Season 5!

Yes, Yes, Yes. Watching it on NETFLIX it went only to Series 3.

Love this show, but the season debut was a little disappointing.

Why not on Peacock?